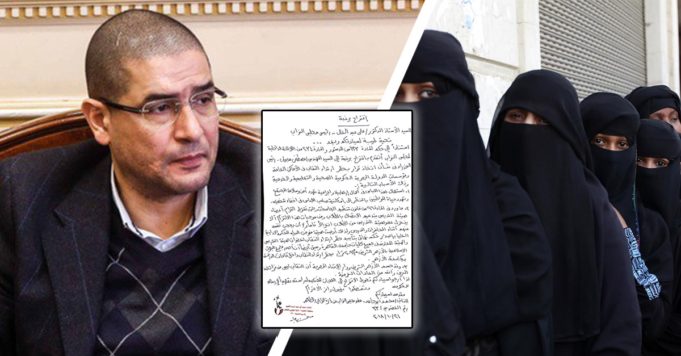 Between bizarre clerics of extremist teachings, people who preach you on a daily basis and reading the daily news; being religiously conscious has become quite the challenge. Lately the Niqab ban has resurfaced again, becoming the second discussed topic after Khashoshgi!

Foreign countries including France, Belgium and Cameroon have banned it. When it comes to Arab countries, however, well let us just say that it remains highly controversial. Algeria recently banned the Niqab; is Egypt on the verge of walking the same path?

A couple of days ago, Ghada Agamy, a member of the Egyptian parliament, proposed banning the Niqab in all governmental institutions, just like Algeria. Meaning -if the bill is passed- any woman with a fully veiled face won’t be able to enter or work there. Unless of course she takes off her Niqab.

It’s worth mentioning that in 2016 the Egyptian parliament was looking into the bill of banning Niqab in public places. That was around the time the court ruled in favor of the fully veiled ban across Cairo University’s hospitals. However, the full ban law was not implemented then.

The Question here is: Should it be banned, or shouldn’t it be? And why?

There is a lot of controversy around the whole ‘Niqab’ issue. Although we are indeed in a Muslim country, where fully veiled women are not so uncommon, not so many people approve of the idea. Let alone those who completely advocate against it.

We are treading cautiously not intending to aggravate anyone, just shedding some light on the pros and cons, if any. And the following is what we came down to:

Well, it’s quite obvious why the  government would want to ban the Niqab in public places and governmental institutions where many fully veiled women work. National Security.

It is no secret that since the Egyptian Jan 25th revolution, the country has been on maximum security alert; heightening its security measures and fighting terrorism on many fronts. Therefore, the idea of not being able to physically identify someone’s face in already targeted public/governmental arenas is unfathomable at this point.

As much as national security should be a matter of top priority under the circumstances, we cannot help but also think of personal freedom here. Some people don’t like the idea of the Niqab even if it does not pose any threat, others have a valid reason for advocating against it. But let’s take a step back and think in a completely objective way here; in the end, it is not really our choice, is it?

Again, of course it does impose a threat to national security to a certain extent. However, it could be argued here that the government can deploy women security guards in all the places where they want to ban the Niqab.

Irrespective of religion or anybody’s point of view on Niqab, it’s a woman’s freedom of choice that allows her to choose whether or not to wear the Niqab. It’s a matter of personal freedom; be it freedom of expression, speech or attire. Which should be granted to all citizens as basic human rights, under most circumstances.

As long as we have the alternative of having women security guards carry security checks on fully veiled females, why not actually do it instead of simply violating rights?

There are two sides to every story that have to be heard for people to sit back, reflect and take everything into account before making a sound judgement. Should the Niqab be banned in public/governmental institutions? Is this a violation of freedom of attire? Share your thoughts with us!