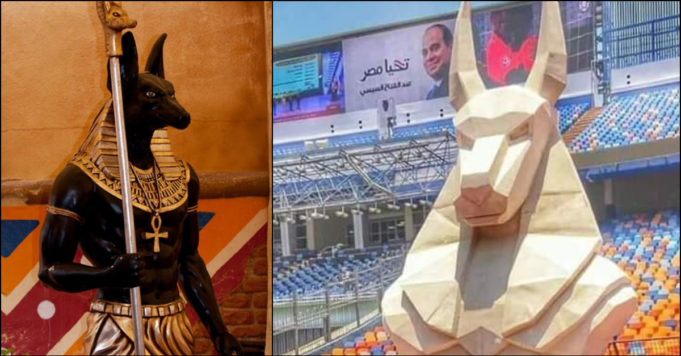 The statue is supposed to be of one of several mascot statues that will be on display at stadiums around Egypt for the occasion of the AFCON 2019 that the country is hosting starting next Friday, June 21st.

The statue is a symbol of the ancient Egyptian god Anubis which people have mistakenly identified as “the God of Death”. However, in actuality, Anubis is the ancient God of the Dead and the Underworld.

Yes, there’s quite a big difference between the two. To understand it, we first have to know who Anubis is.

Anubis is one of the most ancient Gods in Ancient Egypt. He is mainly known as the “Guardian of the Dead”. One of his most important roles was guiding the souls into the afterlife and protecting the tomb.

Legend has it, one of Anubis’s roles was to be present at the weighing scale during the “Weighing of the Heart”, where it was determined whether a soul gets to enter the realm of the dead or not. 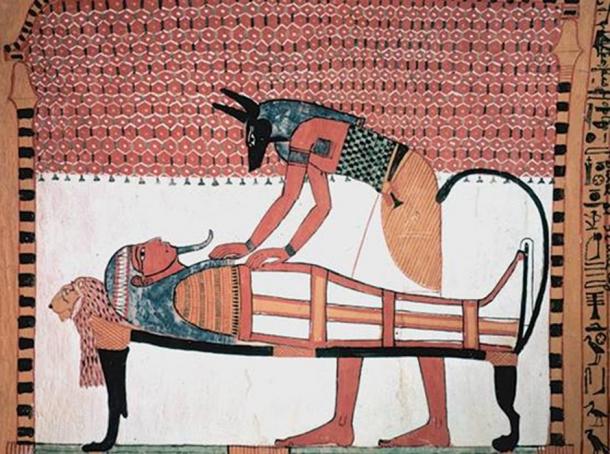 Over the centuries, Anubis’s name appeared in a lot of legends and stories, where he was mostly portrayed as the guardian of the underworld, protector of cemeteries, and guide of the souls.

However, despite being one of the most ancient gods in Ancient Egypt, Anubis played almost no role in Egyptian myths.

Modern pop culture, however, portrayed Anubis a bit differently than Ancient Egyptians did. Books, video games and movies symbolized him as a more sinister figure than it was originally intended in Ancient Egypt. Hence, the mistaken identity and controversy we are facing right now.

Why did using a statue of Anubis spark controversy in the first place?

Well, there are different sides to the conversation.

As we previously mentioned a lot of people have mistaken Anubis for the “God of Death” not the “God of the Dead and Guardian of the Souls”.

So naturally, said people didn’t think the “God of Death” is the most appropriate choice as one of the championship’s mascots. Something about the death part didn’t really scream victory to some.

Another part of the conversation disapproved of using Anubis altogether regardless of what exactly he is a God of. The fact that it was a symbol of A GOD was a deal breaker enough to them.

There was, however, the Anubis-pro side of the conversation, however small, who saw the ancient God of the Dead as the perfect symbol, or at least an appropriate one to represent our ancient Egyptian heritage.

Is it the best mascot for the occasion?

Well, it is, partially, a matter of taste. But looking at the facts, Anubis, however ancient, is not the most prominent or most wildly-known ancient Egyptian god, more importantly, it is not the most appropriate.

Not because he is the “God of the Dead”, but because even though as the protector of the underworld, his role doesn’t really catch the vibes of the occasion and the spirit of it all.

So given the choice, there are A LOT more appropriate symbols we could’ve gone with to symbolize the magnitude of the occasion and what it represents to us as Egyptians.

That being said, the size of the controversy caused by it, however, is still a bit out of proportion. Because even though Anubis is not the best symbol for the occasion, it is not the official mascot, it is only the first statue of several more statues to be revealed during the championship.

It is not THE symbol of the championship. It is a symbol, not the only nor the main one.

So said “controversy” and heated conversations going on online seem to be a bit uncalled for, and by a bit, we mean A LOT.

What about you? Do you think Anubis is an appropriate choice for the occasion? Or do you think we could’ve done better? Let us know what you think in the comments!