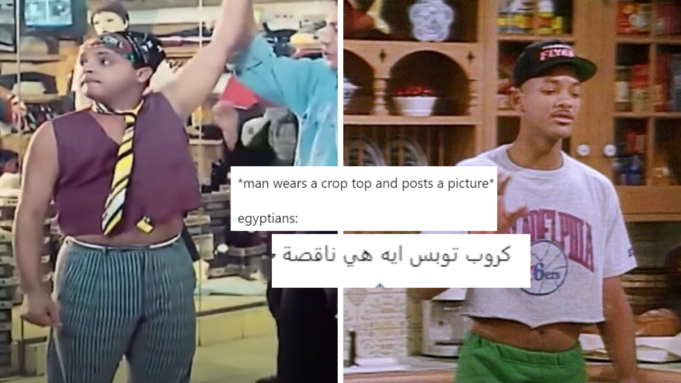 Okay, so here’s the thing. Life has a big set of problems and they all range from the horrifying to the minimal and everyone’s allowed to discuss any problem that falls on that spectrum.

And now that we’ve gotten this out of the way, let’s talk about people not being allowed to wear what they want, because, yes, this is still an issue.

And before you say anything like ‘we’re always discussing women not being allowed to do something‘ and ‘what about the guys’ problems‘, well, right now we’re actually discussing the problem Egyptian men have with clothes.

See, despite how it may look, guys here aren’t really allowed to wear all that they want. A lot of the fashion statements they’d tried were mocked. Like growing out their hair, trying on necklaces or rings, and the color pink.

And recently, one Egyptian dude tried going nostalgic and adding crop tops to this growing list of fashion statements and do we really have to tell you what happened to him?

Though a few comments were supportive and a lot of people actually liked the look, a lot of comments went in the extreme, opposite direction and sent a consistent stream of hate to the user until he eventually deactivated his account. Yeah. It got that bad.

So, you may want to ask, does this have anything do with the all-too-known Egyptian fragile masculinity? Well, yeah. It has everything to do with it, really.

Men in Egypt have always had a problem with defining their masculinity. And you see it all the time too. Whenever a man shows affection, he gets called soft and/or “girly”. Whenever a man cries, he gets told to toughen up and move on and that serious issues can’t happen to him.

It will still happen even though being so sure of yourself a simple piece of fabric can’t change you is supposedly a given because “this is not what a man does”.

Okay, so what should a man do?

Trick question. There’s no model answer to this question but there’s one to the little-asked question of what a man shouldn’t do. And it’s that he shouldn’t do anything he himself doesn’t feel like doing. We’ll explain.

Going back to our topic, we’re not going to pretend that crop tops haven’t always been controversial, regardless of gender, because…well, it takes a lot of confidence to wear a crop top and having that kind of concept can be a little scary to some people.

So yeah, that guy had a lot of confidence to go out and show out like that and others may not, for whatever reason, and that’s fine and all but here’s the thing.

The people cursing and sending hate to the now-deactivated user’s account weren’t all doing so because they lacked confidence to wear the same thing and lashed out. This isn’t high school. Those sending hate were doing this because (and we suspect you know) wearing a crop top in Egypt, if you’re a guy, means that you’re suddenly not one anymore.

And this is why this brand of masculinity, quite frankly, sucks. It just places an emphasis on a certain look rather than on actions that actually do define men, breeding even more problems that cause us all to suffer in the end.

If you want to, work on your confidence so you can do and be and wear whatever it is you want. Try to stop assuming the point of view of all of society’s judgement and keep an open mind. Clothes aren’t the end of the world and if they are, well, we’ve seen people wear worse and live.