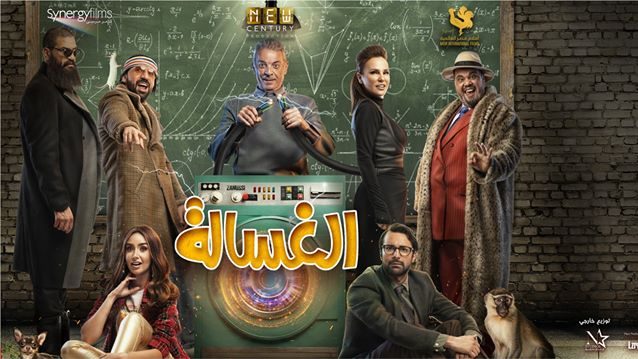 It’s no surprise – the cinematic marathon this Eid is at its lowest. It’s nothing we didn’t see coming. But honestly, what we didn’t see coming though is the great turnout and reviews “El Ghasala” movie-so righteously-earned. We saw the movie, and we decided to give a quick review in case you still didn’t catch it!

Okay, let’s jump straight into it. One of the early merits El Ghasala had to present to us is definitely Wegz’s song holding the same film name. It totally gave the movie this “hip” factor and made it special. Kudos, to whoever made that call!

Written by Adel Salib, El Ghasala adopts the not-so-recurrent theme of time traveling. We know you’re probably getting mental images of Back To The Future, Men In Black, or something along this tricky and mostly complicated area in cinema. But NO!

One of the great things about this movie is the fact that the writer took the time travel theme and utilized it in the simplest way possible. Nothing too serious – no aliens and no wars to save planet earth.

Just a simple love story about a star-crossed couple.

Before we delve deep into the performances; let us jog your memory and remind you of how this is the second time we get to see Hannah El-Zahed and Ahmed Hatem Omar as a couple after the 2019 “Qesset Hob“!

Ahmed Hatem Omar’s delivery of the nerd “Omar” figuring out a secret passage to time in order to save his love life was perfection. He didn’t overdo anything and nor did Hannah El-Zahed as “Aida”.

As for veteran actors and other film guests, Mahmoud Hemida played a huge role in balancing out the movie. He gave it the old wisdom vibe it surely needed!

Another honorable mention goes out to Ahmed Fathy as well; this guy never disappoints us when it comes to comedy. You can always count on him to make any scene X10 funnier.

Simply, a must-watch. It is fresh, funny, and light! One of those movies you just can’t go wrong with. It didn’t even need other Eid movies to compete with, a stand-alone success.