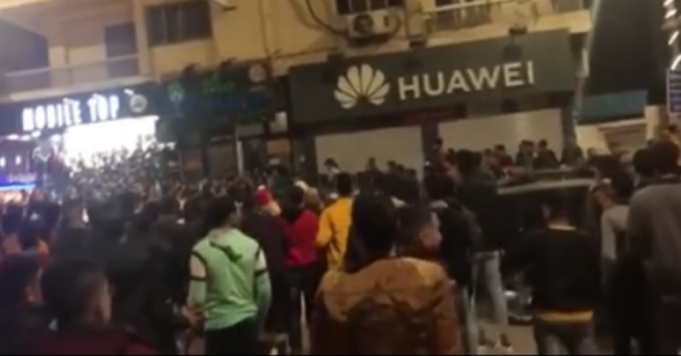 While people all over the world were celebrating New Year’s Eve and welcoming 2020 with joy and open arms; a woman in Mansoura was severely sexually harassed by over a hundred men.

There are far worse videos than the ones we’re sharing that clearly show the horrible crime committed. But for the sake of the poor woman who lived through the horrifying night – we can’t show them.

In case you don’t already know, here is what happened:

A woman was peacefully walking down a street in Mansoura wearing a mini dress with a jacket on top.

And because we live in a terrible place where women are often criticized and abused for what they do, say or wear, she was not only sexually harassed by one disgusting man or two, but a huge number of horrible humans we can’t even call ‘men’ caged her.

From those who started grabbing every area in her body to those who were literally humping her, the whole thing turned into actual chaos. It’s unbelievable.

As if the situation wasn’t disgusting enough, other bystanders on the street – whom we’re also unable to even classify as men – enjoyed the view and cheered on instead of actually doing something about it.

And those who were only watching at first started joining the others, while the helpless woman’s screaming voice echoed everywhere until it turned into a literal group sexual harassment case.

Before all of this went down, there’s a video that shows her hiding in a mobile shop talking on the phone and it looked like she was scared, trying to reach anyone who could help her.

Honestly, when we first heard about the situation and saw the videos, we couldn’t believe what’s before our eyes. We’re definitely aware that sexual harassment does exist in Egypt.

We’re also very familiar with how a lot of men can hardly contain themselves and their disgusting sexual desires whenever they see a woman walking down the street wearing anything – let alone a dress.

But this is not acceptable. We just hit 2020 and every time we think we’re actually moving forward, things like that make us feel like we’re actually taking ten steps back.

If sexual harassment was actually taken seriously in our society, all those who took part in this horrible act – including the bystanders – would have been in prison by now.

That being said, we’re now certain that the law will definitely support the woman if this case is ever taken to court. We have hope in that happening.

Because a day later, after the power of social media spread the incident and advocated for an action to be taken, the Women’s Center for Legal Guidance and Awareness in Daqahlia called for the Attorney General to open a case and punish the criminals in order to make sure this never occurs again.

We really hope justice prevails because this crime cannot go by unnoticed. We’re in 2020 and Egyptian women and even tourists are still scared to roam the streets alone wearing whatever they please because we’re living among actual predators.