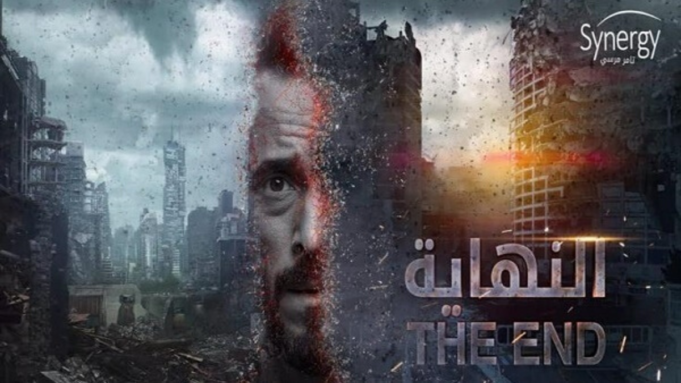 Egypt has a shortage of dystopia-based sci-fi TV shows, doesn’t it? Actually it’s not a shortage; they straight up don’t exist. Or at least they didn’t until El-Nehaya premiered this Ramadan. With a concept this different from the rest of TV, it’s no surprise that the leading man is Youssef El-Sherif. Come on, did you even have questions about that?

However, you may have a few questions about the show itself. Specifically, is it even worth watching? Well, if you’re curious, read this review up.

El-Nehaya starts with a monologue, an explanation of darkness and light, in a setting we’re not quite sure is ancient or modern. That is, of course, until we go to the next scene where we discover we’re way into the future, specifically in the year 2120.

This future, however, is less like the flying-cars-utopia future in old movies and more like the dystopian future where everything is a thousand times worse except with better technologies.

So far, the only positive is that Arab countries banded together to rid the world of the Zionist state and liberate Palestine. But we mean it when we say everything’s a mess. People being banished into nuclear wastelands for punishment, a few select companies ruling the world, and education being banned except for a select few.

Our story begins in Jerusalem (curiously with no Palestinians) with Zain (Youssef El-Sherif), a power engineer who wants to change the world through solar-powered energy chips that would power people far more than standard-issue power chips, except that no one in his company is willing to listen because what he’s suggesting is illegal.

While this is happening, Sabah (Sahar El-Sayegh) is building an illegal android version of Zain, who she’s in love with, through Aziz’s (Amr Abdelgelil) help and Zain’s wife Radwa (Nahed El-Sebaei’) is being bribed by Official Mo’nes (Ahmed Wafiq) to give him food resources her department is responsible for.

When she doesn’t agree, Mo’nes puts her and Zain under surveillance and this is where the story gets interesting. Zain is a part-time teacher at an illegal school and is now a state target.

These plot lines with Sabah, Zain, and Mo’nes, all eventually intersect into El-Nehaya’s ultimate story-line: a Westworld/Black Mirror-inspired question of whether rapid technology is what actually spells the end for humanity.

El-Nehaya blessed us with a lot of characters but we’re narrowing it down to the main (or near-main) characters: Zain, Robo-Zain, Radwa, Sabah, and Aziz.

Our protagonist, Zain, is the poster child for the stereotypical idealist with big ideas to change the world. Because of the show’s events, though, Zain begins to doubt himself and discovers that there’s no place for an idealist in a non-ideal world — and it gets worse because someone made a copy of him.

That copy, Robo-Zain, is arguably the most interesting character on the show since we pretty much know he’s a stand-in for the moral question behind AI and whether we have the right to create and condemn our own creations or not.

However, even if Robo-Zain is intent on destroying mankind, he’s not painted as the show’s villain. That title goes to Mo’nes and we agree — a man who blindingly follows rules without question is an honestly too familiar story we’ve all heard.

Another interesting character is Sabah, whose story so far is a one-sided love story-turned-nightmare. After her prison break, though, we have hopes that she will go far and beyond. So do we for Radwa, who must be near her breaking point after her entire world turned upside down.

To wrap up, we also have Aziz, a prosthetic parts mechanic, who helps Sabah create Robo-Zain and is sitting on a hill made of secrets. We’re not sure if he’s meant to be an android, too, or if he’s simply a Man Who Knows Too Much — all we know is we need to know more.

Okay, so after this review-dump, you probably want to know the answer to your question. Should you watch the show? To that, we’re saying gladly go for it.

It might not be the perfect show, as several people noticed a few directorial and script mishaps (how doesn’t Radwa realize her husband is a robot, come on?), but it’s an interesting show with an interesting concept.

We rarely get any dystopias in Egypt, never mind a show of that also digs into the status quo. And yes, it’s too early for fan theories. You know Youssef El-Sherif loves explaining it all in the very end.

Will you ever be sure of how a Youssef El-Sherif show will go? Absolutely not but that doesn’t mean you can’t enjoy it.