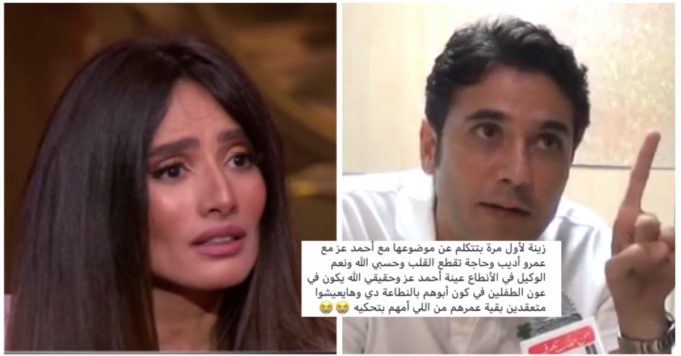 In the newest episode of Amr Adib’s “El-Hekaya“, Egyptian actress Zeina finally broke her silence on the drama that has been going on for years between her and Egyptian actor Ahmed Ezz.

To refresh your minds, Zeina and Ahmed Ezz got married in 2012, and based on his suggestion, the couple flew to the United States a year later to have their babies there.

But that’s when all the drama started as Ezz left five month pregnant Zeina and flew back to Egypt. He also asked for a DNA test after she gave birth to twins Zein El-Din and Ezz El-Din.

Not to mention his televised appearance where he so clearly and publicly denies the children and hints at Zeina’s ‘bad‘ reputation.

Even though he was fully involved at the beginning and according to Zeina, happy, when they got the pregnancy news.

The actress also told the story of how often he changed his mind about the pregnancy. Since one day he’d want the baby, and the next he’d be thinking about an abortion.

Mainly, because of his own reputation and the fact that he was scared of losing his female fanbase.

Which is why before resorting to the repudiation divorce, Zeina had agreed to retirement and living in the United States; with Ezz being between Egypt and the US to come see her and the children.

But again, that was all before he escalated things and had denied the children and ruined her reputation in front of everyone, including their mutual friends.

Zeina wanted people to know that she wasn’t the one who escalated things or started filing lawsuits out of the blue.

But she was shocked after he publicly trashed her and refused to issue their children’s passports so they could come back to their home country.

The problem here is that Ahmed Ezz the very ‘popular‘ actor did Zeina wrong, the woman who so blindly loved and trusted him with herself as well as his own flesh and blood.

At least we heard about what’s going on because Zeina is a public figure, too.

But what about all the other cases where regular Egyptian men abuse and walk out on women who are either left abandoned or have their children taken away from them for no reason at all?

Zeina, for example, was dumped when she had the twins and had no one to rely on when they were having some serious health issues.

We also have a very recent example that shows how the world can be so cruel to women because a lot of men are just untrustworthy and abusive these days.

Remember Shorouk whose abusive and cheating husband literally kidnapped her two little girls? If it wasn’t for Radwa El-Sherbiny, they would have never reunited.

But again, at least we heard about Shorouk’s story. What about other women who go through so much worse just because they married men who turned out to be the opposite of who they claimed they are at the beginning of the relationship?

From now on, clear and immediate legal actions need to be taken against every man who doesn’t own up to his mistakes and either domestically abuses women or contributes to damaging his children’s future and mental health in any way.

Lost rights need to be restored…

We also need to open our eyes and minds and understand that everything is not what it seems; just because a man seems to have a shiny reputation and good looks doesn’t mean he’s an angel, because in reality, he can be very far from that…