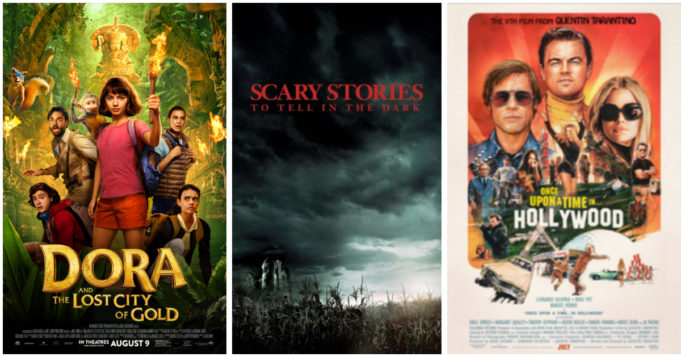 It’s true that Eid season is all about long awaited Arabic/Egyptian movies, however, not everyone is that interested in the new Arabic releases.

Which is why we kept this in mind and decided to make you a list of the English movies getting released in Eid Al-Adha, so you won’t miss out on the movie theater fun experience:

#1 Once Upon a Time In Hollywood

Brace yourselves, because we’re about to witness a Tarantino greatness that features two of our all time favorite Hollywood legends!

Cast and crew: Starring Leonardo DiCaprio, Brad Pitt and  Margot Robbie. Written, produced and directed by the one and only Quentin Tarantino.

The Sony Pictures Entertainment Production is set in 1969 as a tribute to Hollywood’s golden age. The movie takes us through multiple storylines with a TV star and his longtime stunt double.

Ready to rejoin the feathered friends in yet another eventful journey? Red, Chuck and Bomb join forces to protect and stand against the danger of the aggressive birds threatening their hometown.

#3 Scary Stories to Tell in the Dark

A little horror in the Eid time won’t hurt anybody, right?

The horror film revolves around a series of terrifying tales that come to reality in a haunted mansion. And unfortunately, a group of teenage friends get tragically involved.

#4 Dora and the Lost City of Gold

Who doesn’t just love an old good anime coming to life? It’s true we’re not really big on live actions, but we’d be so in if it’s actually good, and this one looks like it is!

Cast and crew: Starring Isabella Moner, Micheal Pena and Eva Longoria; based on Dora The Explorer, produced by Paramount Pictures and directed by James Bobbin.

According to the original story, the movie revolves around the always curious and adventurous Dora who embarks on a quest to save her parents. Along with a group who came together to solve a dangerous mystery.

A little bit of drama and comedy crime is needed, if you ask us!

The Warner Bros. Picture revolves around a group of women who follow their locked up-gangster husbands’ footsteps, only to become even more dangerous. The series of funny/criminal events will surely keep you entertained!

And there you have it! We’re pretty sure your Eid just got 10 times busier. Let us know what you think of the English movies list once you get the chance to see them!