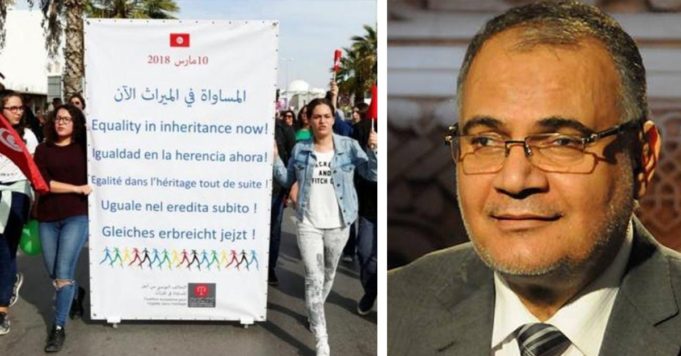 Dr. Saad Eldin El Helaly, a professor in Al-Azhar University, stated that in Europe, women inherit the same share as men while here women only inherit half, based on the 2:1 ratio for inheritance.

Dr. Saad is renowned for his progressive views, as he previously said that religious preachers should be contemporary and up to date with current times and events.

After its announcement and implementation in Tunisia, the amendments in the inheritance laws equaled men and women’s inheritance shares.

This stirred mixed opinions among people not just in Tunisia, but across the whole Arab World.

As there were proposals in the Parliament concerning following up the change to be applied in Egypt as well, we were curious to know what Egyptians think of this law.

We surveyed 24 people and from them; 15 were with the equality, 6 against and 3 neutral.

Here is what Egyptians of different ages and gender think of the new inheritance laws:

I don’t think it makes any sense that men get more than women. The excuse for it is the fact that men are the “caretakers” and “moneymakers”, which should lead to women taking as much anyway since not all women have jobs or equal opportunities as men. Based on our society, men do have more sources of income. Women should at least get the same when it comes to inheritance. Oh, and the worst part is, women taking less for the death of their husbands, who are the caretakers; according to this logic, the woman is left with no source of income. Why would the husband’s brothers take more money? It just doesn’t make sense.

The “men” taking the inheritance may spend it on promiscuity rather than being good husbands and supporting their households. On the other hand, sometimes the women in these situations—more “men” than actual “men”—can be in dire need of the inheritance to support their families and households.

The thing is that the scripture isn’t ambiguous, but not elastic, as well. It comes to us to make sure that the applied legislation is lenient and flexible with all the common and possible cases.

Normally, this won’t be of much relevance to me; however, I can understand the reasons behind such changes. Some women suffer indeed when it comes to inheritance in Egypt and I believe we here get fixated on stuff that suit the majority of those in control.

This is haram! Of course I’m against this. What is happening to our country?

This is not acceptable and is a clear violation of religious scripture. What’s next, homosexual marriage in Egypt?!

It’s against the Islamic ruling, but then again it’s not like many people follow the Islamic ruling when it comes to responsibilities. So our current reality is probably what led to this law being put in effect. However, many people who object to the Islamic ruling’s nature are mostly focused on the part where it’s said that the sons inherit twice as much as the daughters and they tend not to take the rest of the inheritance law with its entire nuance into account. It’s not an entirely straightforward issue.

What about you? What do you think of equal inheritance for women in Egypt? Let us know in the comments.