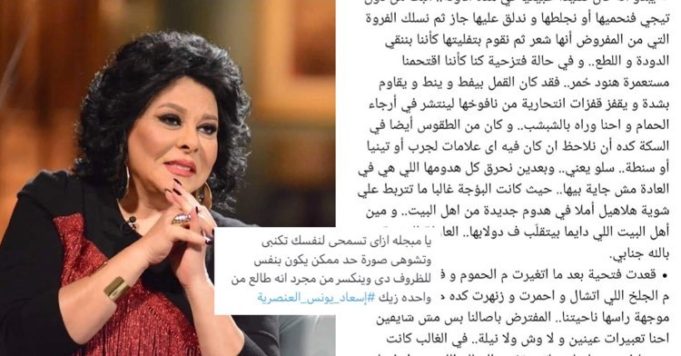 While our timelines were jammed with stories of rape and sexual harassment for the past couple of days, a different story was locked and loaded. An article written by Esaad Younis, aka Sahebat El Sa3ada, managed to strike much anger and resentment.

So here’s the full story in case you missed it.

In 2013, Esaad had published an article that was full of some pretty controversial political undertones for El Masry El Youm. At the time, the article passed just like any other article written within context. However now, when reposted in light of the 30/6 annual celebrations, it drew some serious heat, and here’s why!

“Fatheya” is the name of the article, that shortly after reading you’ll realize is merely a metaphor about a certain political party. This is the exact justification Esaad used to refute her accusations of being a “bully” and a “classicist” towards a segment of the Egyptian working class.

In the article, Younis vividly describes the appearance of the small girl from the Egyptian countryside that came to work for her family as the new housemaid. Using nothing but the most hideous of terms and analogies, to the point where everyone felt utter disgust upon reading the article.

We get it, many defended Younis by saying how she meant no harm or hate to the mentioned group, and that the exaggeration was intended to serve literary purposes. But is this enough of an excuse though?

Satire is not a new concept for any of us. But do we have to bring down an entire socioeconomic class and call them stupid, lazy, and poor looking to make a point? We think not.

We think there are a million other ways and a million other metaphors that Esaad could’ve easily utilized to deliver deeper meanings to her story without being condescending to anyone. Let alone, offend an entire GROUP OF PEOPLE.

Some of you might think that everyone’s being too sensitive and basically trying to force “political correctness” down our throats. Well, here’s the thing. We know we live in the time and age where any kind of hate speech won’t be tolerated and we think it’s nothing but justice.

Being a little sensitive or appropriate won’t harm anyone, right? As a matter of fact, it’ll help increase tolerance towards others. Especially, those who are different from us. If someone’s asking you to be decent and humane when describing others, they won’t be asking for too much here.

So, what do you guys make of this whole thing?