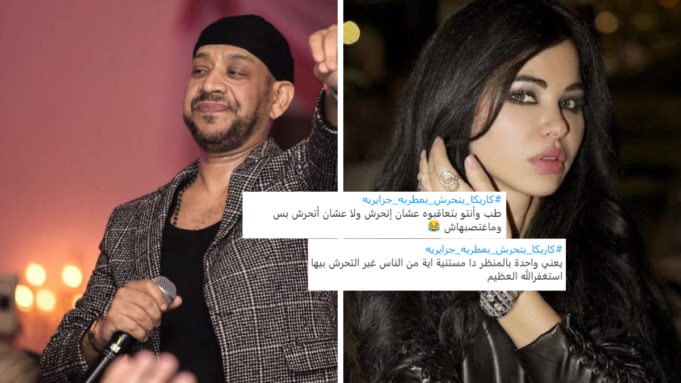 In August of 2019, an Algerian singer by the name of Yasmine Nayar filed a lawsuit against composer Essam Karika for not following through a deal for a song he owed her. Back then, we’d heard this and shrugged because, well, cases like these sometimes happened so it wasn’t a big deal.

It wasn’t a big deal until a few days ago when Nayar posted this video, calling out Musicians’ Syndicate President Hany Shaker and revealing that Karika had also harassed her.

Naturally, this fact blew up Nayar’s case against Karika even more to the point where a viral hashtag, #KarikaHarassedAnAlgerianSinger, drew even more attention to it.

This is where things get rather disappointing, though. See, instead of the people finding harassers and injustice revolting, they went the other way and took Karika’s side over Nayar’s.

Among other comments, most people focused on Nayar and what she was wearing and how she generally looked. Some even mentioned that “when someone looks like that, you just don’t help yourself“.

These reactions are classic examples of victim-blaming, a word that not many are familiar with, true, but you don’t really need much knowledge to know that blaming harassment on the harassed is 100% wrong 100% of the time.

Whether the victim was “covered up” or not, attractive or not, victim-blaming is still degrading, to put it plainly.

Victim-blaming is also still the number one reason a lot of harassment and rape victims don’t come forward with their cases. They fear that they will be judged and blamed and dismissed, which is exactly what’s happening to Yasmine Nayar right now.

We won’t pretend to know everything that happened with the lawsuit, but what we do know is that we all have a responsibility to help harassment victims. And helping them, in this case, means believing them and making their voices heard without shame until the truth is out.

She doesn’t have to be your friend, neighbour, or cousin to be believed. She’s still someone.