Identity Magazine
Home Trending Ever Tried To Educate The Masses and Got Called An Atheist? El-Da7ee7...
Facebook
Twitter
Google+ 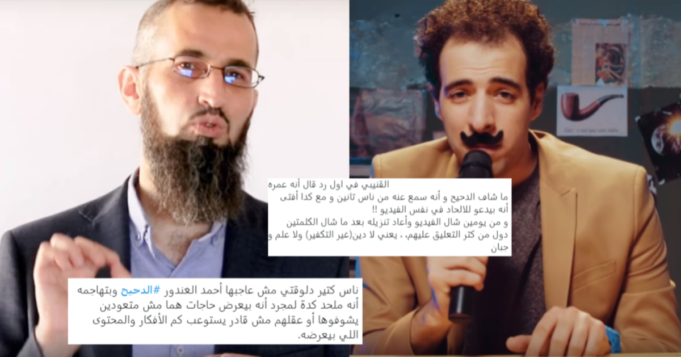 We would like to bet that when Ahmed El-Ghandour started his Youtube program, El-Da7ee7, he wasn’t expecting to be the face of controversy every once in a while.

Yet this is exactly what happened. After a surprising debacle with Nippon AR, El-Ghandour is now in a row with Dr. Eyad Qeneby.

Much like it always does, the predicament started with an episode.

This one in particular (titled Ya Mahasen El-Sodaf) might not seem controversy-worthy, since it discusses probability and coincidence, but Dr. Qeneby managed to find a way to make it just that.

In a 24-minute video, Dr. Qeneby took it upon himself to write a full response to El-Da7ee7’s episode.

A large chunk of this video is calling the episode pure blasphemy, while the other is dedicated to “exposing” El-Ghandour’s behavior as marketing for atheism, sadly not a first for the latter.

Yes, somehow we went from talking about probability and multiverses to accusing a Youtuber of spreading atheism. This is 2019 now.

This didn’t go well with Qeneby, who posted another video discussing El-Ghandour’s “clear calling” for atheism and the nonexistence of God.

Among the points the doctor mentioned is that El-Da7ee7 has apparently said people can bring back the dead to life and that evolution is real.

He also criticized him for basing his sources on the books of “stupid atheists“. One of whom is theoretical physicist Stephen Hawking, by the way.

The Backlash and Exposing of Qeneby

Although El-Da7ee7 himself hasn’t given any comment on this one-sided row, many took to his defense and debunked most of Qeneby’s points.

One of the points in Qeneby’s second video is that El-Da7ee7 made a mistake when talking about the human eye and the inverted retina, not knowing that he was previously notified about and apologized.

Another debunked point is that El-Da7ee7 was strongly in support of the multiverse theory, which was naturally a big part of Qeneby’s campaign against him.

A quick re-watch of the video, though, will reveal that the theory was mentioned in a series of other examples.

This same re-watch also shows us that Qeneby picks and chooses bits of El-Ghandour’s videos to paint him as the anti-Christ figure he portrayed him as.

Many actually think Qeneby might putting on an act because, as a pharmacist, there can be no possible way he believes half of what he’s saying.

For these, it’s the only way this can make sense.

We Need To Learn A New Way of Dialogue

No one is above error, not even famous Youtubers who discuss science and history.

This is the point in which we have to be critical and not take everything at face-value. If you think something’s odd, dig deeper. Look into it.

Don’t believe everything you hear and then act surprised when it’s not actually true. This time you might have it coming.

El-Da7ee7 even says this, stressing that he doesn’t offer the deep, well-researched material everyone wants of him, but others do.

The fact that the material is shallow or that its presenter sometimes errs doesn’t excuse the way Dr. Qeneby has handled this dialogue.

As we approach the new decade, we need to understand that we can disagree. There might be no way around it in any shape or form, but it doesn’t mean a license for character assassination.

We’ve disagreed and reached a dead-end, but this doesn’t gave us an excuse to tear into someone’s character and beliefs, especially if we don’t even know them.