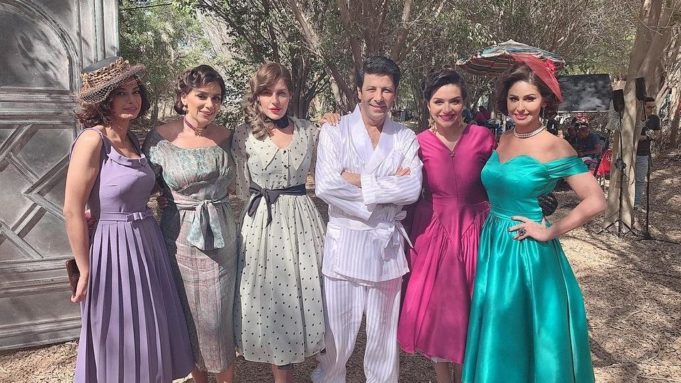 It’s been a while since Egyptian drama series have caught our attention, except for a few shows here and there, apparently those days are now behind us.

For months now, we’ve been seeing some promising photos of a new series called “Hawadeet El Chanzelzeh” on the Instagram accounts of people like Injy El Mokaddem, Eyad Nassar, Dalia Mostafa and Mai Selim. They all looked picturesque, we couldn’t wait!

Just a couple of days back, MBC released the first episode, and everyone was left in AWE. The series became an instant obsession. Want to know why? Keep reading!

The episode opens in “Medias Res” or in the midst of the plot. From moment one, you are thrown into a place of fear and anticipation. You witness a hideous murder (Agatha Christie style) of what later appears to be the leading character! So, they definitely got our attention.

Things get further complicated when not one, but FIVE WOMEN, confess to the murder. This leaves us wondering what could the charterer of “Reyad” possibly have done to them?

Hang on, this gets better. The episode ends on a cliffhanger that will leave you gasping for air!

Eyad Nassar As the Anti-Hero

After watching Eyad Nassr in Afrah El Qobba and Haza El Massa, we knew he was destined for greatness. And now, he’s the protagonist of his very own TV series that is the talk of the hour.

How could it not be? His charterer “Reyad” appears to be this mysterious multi-layered complex with hints of a sociopath who dies in the very first episode.

As the events unfold in flashbacks, we get to know how this character may have made some petty poor life choices that led him straight to such tragic ending. Chapeau Nassar!

Just when you think this couldn’t get any better, we see a touching scene that suggests subtle parallelism.

We have the police investigator (portrayed perfectly by Edward!), this amazing family man who gives his all to the household and represents family values, and Reyad, who keeps his barren wife awaiting his arrival for hours while he is out there leading a double life!

Setting: Out of this world

The events take place in 1950s Egypt. Which is definitely another huge attraction element. We get to obsess over the beautifully tailored buff dresses on our favorite characters and bless our ears with the eloquent language of that era!

Not to mention, a calm melancholic soundtrack accompanying you throughout the whole thing to set you right in the mood.

All in all, the show, so far, is beyond amazing and we can’t wait for the next episodes to unfold even more secrets. BUT, will it live up to our (already very high) expectations? Guess we’ll see…