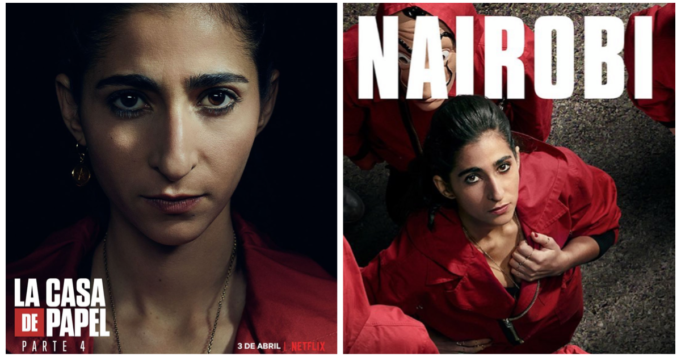 We exclusively spoke to the amazing Alba Flores who plays everybody’s favorite Nairobi on the show. The actress who stunned the audience with her performance, especially in Season 4, spoke to us about the latest season, what goes on behind the scenes, her co-stars, the fanbase of the series and much more!

1- How do you see Nairobi’s character development on the show?

Actually a lot of people ask about this and are curious about her clear character development because each season reveals a different part of Nairobi’s character. And throughout the whole show, people learn more about who she really is.

2- What’s your favorite thing about Nairobi’s significant personality and presence in the series? And is there anything in specific you wish you could’ve changed about her for any reason?

What I like about Nairobi is the way she knows how to handle the work – the moneymaking – with the people in the bank [the band who printed the money and melted the gold in Seasons one, two and three]. That’s when and how she developed her leadership on the show.

However, I wish she had more self-confidence and more faith in herself. That’s maybe the one thing I felt she really lacked and the one thing I disliked about her. Because if she did, and if the plan of the heist was in her hands, it would’ve been even more successful. And that again goes back to the way she knows how to handle things, people and situations.

3- From the very beginning, we could see how Nairobi and Helsinki’s friendship developed as the events of the series unfolded and we quickly noticed how tight they’ve become, especially in the third season.

How do you see their friendship, and how can you define Nairobi’s feelings for him?

All the relationships in the series are always evolving and changing. And in my opinion, that’s one of the very significant and different things about “La Casa De Papel” because there’s always something going on with the characters and their relationships with each other.

Regarding Nairobi and Helsinki’s relationship, I think the bond between the both of them speaks about a different and a rare kind of love. Mainly because it’s derived from a very profound and deep friendship. Not to mention that it’s pretty much a friendly romance between a man and a woman, without any sexual intercourse.

We can also see how things are, to some extent, up and down between them as Nairobi starts distancing herself a bit due to the newly founded sexual relationship between Helsinki and Palermo in Season three.

4- So far, which has been your favorite season from the show? And which scene can you say was the hardest to shoot for you?

To be honest, with no specific scenes, the last season – the fourth one, was the hardest to shoot. While my favorite, I would say is the second season of the show. It was the most fun for me!

5- Who’s the co-star you usually have the most fun with behind the scenes of “La Casa De Papel“?

Honestly, I would have to say that I really enjoyed working with Pedro Alonso, the actor who plays Berlin. He was the funniest on set!

And even though I didn’t get to work with him as much as I did with the others nor did I get to directly work with Najwa Nimri who plays inspector Alicia Sierra, I still really loved having both of them on set and I wish we shared more scenes.

6- You know that “La Casa De Papel” has grown a huge international fanbase over the last few years and that it has quickly become one of the most talked-about shows in the world. How do you feel about all of that?

To this day, I can hardly wrap my head around the fact that there are so many people who are loving, following and talking about the series on social media. I can’t put in words the huge impact “La Casa De Papel” has made because I myself still can’t believe it.

I mean, for example, we were shooting some scenes back in Brazil, and there were hundreds of fans everywhere near the location and it’s honestly so crazy that we even have fans in countries like Brazil. It’s still all too surreal for me!

7- Needless to say, the fans have been waiting for Season 4 for so long already and they have a lot of burning questions waiting to be answered. What do you have to say about the latest season of the series?

All I can say is that everyone behind the show, from the cast members to the crew and all the team, is working very hard to produce an unexpected worthwhile storyline for the fans. And the fourth season is surely full of surprises and a lot of unpredictable shocking moments.

We had so much fun interviewing and chatting with the beautiful Alba Flores. Stay tuned for the rest of our exclusive interviews with the amazing cast of Netflix’s “La Casa De Papel“.

And don’t forget to let us know in the comments if you enjoyed Season 4 and if you have any questions for the stars of the show!