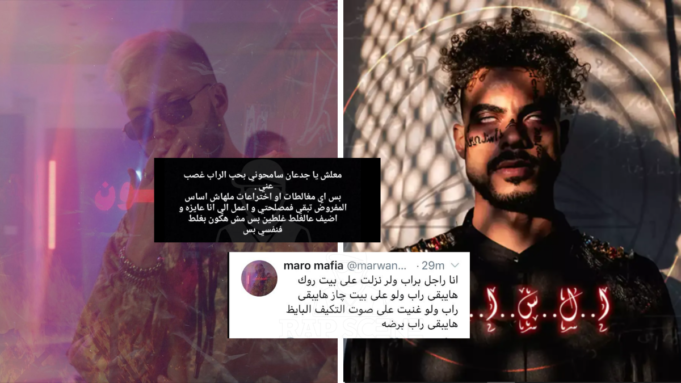 Hey, quick question. Have you ever been just chilling and existing and then realized, very painfully, that we’re kind of living in the early 2010’s of certain musical genres? As in, we’re in the “Is Drake Even A Rapper” era?

Yeah, this might be a bit confusing just shooting off the gun like this, so we’re giving you some background.

After the growing discussion about why all Egyptian trap/rap tracks have been sounding more and more like Mahraganat and less like “real rap”, rapper Marwan Moussa took to his Twitter account to explain it all.

In two audio tweets, Moussa said that the Egyptian rap and trap that we’ve been hearing before was simply the product of a scene that was heavily influenced and inspired by American rap.

He also said that Egyptian trap now was growing into its own identity as something uniquely Egyptian, which is why it actually sounds similar to Mahraganat in a way.

Naturally, this didn’t fly with a lot of people, like Batistuta, who said, among other things, that rap is rap and that you cannot just make a Mahraganat track and try to pass it off as something else (i/e: Sharki Trap).

After these two rapper-producers’ weighing in on the subject, the discussion took off and hasn’t quite settled yet. There are a lot of questions here, like:

Just what is and what isn’t rap? Can Sharki/Eastern Trap actually exist or is it just a made-up name? Can a rapper’s track be considered an actual rap track if the beats belong to a different genre?

Are our rappers just churning out Mahraganat hits now? Should we stick to what old-school rap used to be?

So, these are all interesting questions and all because, like we said, we’re just so early-2010’s now, it’s kind of startling.

Quick story-time – when Drake first came onto the scene, he was looked at differently because he was not seen as a real rapper. In fact, there was a bit of a debate going on of whether Drake is a rapper or popstar. All because he didn’t exactly stick to what people considered Real Rap.

As you can see now, things are different. No matter what you might think of Drake as a person, you can’t really deny that he’s a rapper, regardless of his genre-dabbling or experimentation.

So why can’t we have the same thing in Egyptian rap and trap music? Why is it that adding anything that speaks to our own identity seen as “cheap” and “degrading”?

Here’s the thing, it all circles back to how people perceive Mahraganat music. Now you can hate Mahraganat and if you do, then by all means, keep on keeping on and all that jazz.

But you can’t deny that Mahraganat music, with all its culture and style, is something that is uniquely Egyptian in the same way that Reggaeton is Latin American and Grime is British.

Like it or not, Mahraganat is the sound of Egypt’s streets, even as it grows and mixes foreign elements (it is a globalized world after all) to create a new sound.

Egyptian rap/trap scene teetering adding uniquely Egyptian elements shouldn’t be “shameful”. And creating a subgenre out of it shouldn’t be seen as selling out because it really isn’t.

Art is a living, breathing thing that grows without restriction. Putting limits and restrains on what “real rap” is and isn’t, without taking subgenres and genre-evolving into consideration, only gatekeeps the genre. It offers no room for creative freedom.

And in the end, this is the only thing that can kill a medium, truly.

Egyptian trap, Sharki trap, Mahraganat and more…just when did the identity crisis happen?