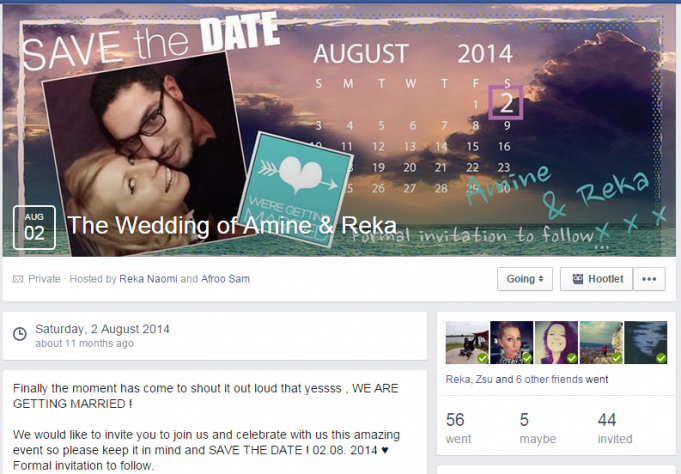 Since everything has become virtual and since everyone around the globe is opting for choices that save time and money, people have recently started to invite their friends and acquaintances for their weddings, birthdays and events through Facebook. It has become extremely common, that actually now, it’s even odd not to create a Facebook event for your special day.

In the old days –not very long ago- people used to print invitations and deliver them personally to their guests’ doorsteps, occasionally following that with a phone call to confirm receipt and attendance. It would’ve been considered disrespectful otherwise. Yes, people don’t have time for things like that anymore and it might be more economical as some people claim, however, at least send a personalized sms or Facebook message.

The problem is that people never really know if it’s a sincere invitation or just a “3ozoumet Marakbeya”!! Here’s the question: would you or would you not attend an event that you’ve been invited to via Facebook? We got different opinions from a random group of people!!

“I wouldn’t. I think it’s a bit degrading. If someone cares, they will at least try to contact me.” A.E.

“No, I wouldn’t. I consider it a nice way of telling me they are getting married without actually wanting me to be there.” G.K.

“Unless they call to confirm, it’s not an invitation.” N.Z.

“No, I believe it’s a casual invitation. I consider it more as a reminder but not the only invitation.” M.N.

“Facebook invitations are a nice way of informing people you’re getting married, but unless you inform them in person then it isn’t a nice way of inviting someone and expecting them to show up.” F.E.

“Well, it depends on who the people are and how well I know them. As a former bride who knows how big of a hassle it might get, I’m confident that a Facebook invite is just because I know it will take a hell lot of time to invite everyone personally and a huge budget to print all the invitation cards. It’s just nice of them to invite me through Facebook, but I’m sure they won’t really notice my absence, so no, I wouldnt really go.” F.K

“Actually, I don’t attend Facebook invitations at all, whatever it is, simply because if I wanted someone to attend any of my events, I would contact them directly. I will consider a Facebook invitation as a reminder only. That’s my opinion.” R.A.

Depends on how close the hosts are to me.” M.N.

“No, I don’t attend weddings or any events I’m invited to it through Facebook, unless that person called me earlier and they wanted to confirm their invitation through Facebook.” L.Y.

“If it’s only a Facebook invitation, then most probably I won’t attend. However, if it’s followed by a WhatsApp or Facebook message in addition to the fb invitation, then I’ll go. I believe in such events you need to show you’re really keen that your guests received their invitations. You need to confirm with them.” R.Z.

“I wouldn’t, regardless how close I am to that person. I know people don’t have time to call but it’s not an excuse; they have to call every single person if their attendance is important to them.”

“I don’t usually see it as “rude” but the fact that they didn’t call just proves that you’re not that close, which is actually the case with most of your Facebook friends. I wouldn’t go unless it’s a super huge wedding with lots of celebrities and it would be the talk of town, loool” A.B.

“Actually, I don’t attend weddings or any events I’m invited to through Facebook except if the person wanted to confirm their invitation through Facebook and of course they have my telephone number.” M.M.

“If I’m invited and she’s not a close friend and didn’t send me a direct message or called me f dee 3ozomet marakbia and I wouldn’t go akeed.” N.G.

“If I didn’t receive a call, I don’t consider it an invitation. I would go if it’s a birthday party.”

People Who would go:

“Sometimes, you don’t have enough time to call every single guest. There are friends from school or whatever whom you would really like to attend your wedding/engagement but don’t have their contacts anymore or haven’t talked to them in ages, so it’s a nice gesture to show people you still remember them and would like them to share your special day. I don’t see it as something degrading at all because we should always give people the benefit of the doubt.” D.A.

“I don’t mind at all; we don’t have to complicate things for the bride and groom. It’s nicer to do it by phone but if they didn’t want to invite me they wouldn’t have clicked my name, easy as that.” H.I.

“You can usually tell how genuine the invitation is from the number of people invited, and based on that, you know whether to go or not. If you get invited by someone who’s not that close and you see that they invited 500 other people, you can tell that it’s probably mogamla. But if the list of invitees only includes 100 guests or so, then they probably mean it. They just don’t have the time or the resources for a more ‘personal’ invite.” M.A.

“I go to a wedding when I’m happy to see these 2 specific people get married whether or not they called because I truly understand how much of a hassle it is to invite each and every single person separately (especially in Alex when young people guest lists can easily surpass 400. If they did call however, I would definitely put more effort but it still depends more on how I feel about the couple.” S.H.

“Well, I’d attend if the invitation says that it’s an official invitation, and no I would never attend a wedding I’m not invited to. I actually feel it’s offensive because people started to care less to even call and invite.”-O.S.

“Honestly, with today’s modern day and age technology, paper invitations are pointless. You’re spending money and wasting paper on a piece of paper that will probably be thrown away a second after seeing it. Unfortunately, for older generations it’s still a formality to receive a paper wedding invitation (even though most of them use Facebook heavily now, even more than the younger generations). For the younger generations, it’s perfectly acceptable to have a wedding Facebook event as an invitation. It’s easier because you can check that you invited everyone and the event sends reminders to people a week and a day before the event! So it’s all around better for the attendees and the bride and groom! And to the people who commented on this post saying they think it’s degrading to not receive a call, you try calling over 200 people in a row in a few days and see how you feel. People really need to get over themselves… *just sayin’” Y.A.

“Depends on how well I know the bride honestly. If I’m a good friend of hers and I know she wants me there, then for sure I’d go. If not, I just ignore it. It’s so much of a hassle especially if Allah has blessed you with a large number of friends and family, so in that case seriously no one can manage to call. I don’t find it degrading in any way to be invited through Facebook. In my event, I stated clearly in the description that I really meant every single one I invited.” M.D.

“Depends on how well I know the groom or bride, and how I see the event. If it looks like an “invite all” event, then most probably I won’t go unless it’s followed by a personalized invitation. However, if I see it is a specific invitation using a Facebook event, then yes, I would go. Some people don’t have time, or are too stressed out before their wedding to call and invite each person.” M.Z.

“I used to think it’s rude but now with prices going higher each day, I totally understand why it’s happening.”-B.G.

“I’d surely attend especially after my wedding. I knew how hard it is to call everyone on the phone; I really consider it an official invitation.” Y.G.

“I don’t think it matters to be honest. Facebook wala la2a, just go and have fun if you’re available and if not 5alas. There are so many other things to be concerned about.” M.A.