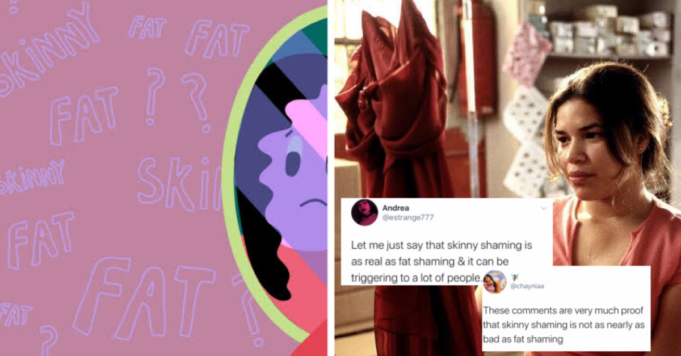 Social media isn’t social media without a heated debate over some controversial topic every now and then, right? That’s what happened a few days ago on Twitter. But this time, the topic hit home for many and we understand why.

Many were arguing on the platform about fat shaming and skinny shaming, in terms of which leaves a mark and hurts more. However, the debate led a few people to bring up the most awful things that were said to them because of their body shapes.

Questions like “Do they eat your food at home?” and “You look like a stick, are you sick?” and more are being used to skinny-shame so many girls and women, nowadays, while “Why are you still eating? Have you seen yourself?” and “Slow down on the food or else, you ain’t going to find someone to marry!” are also some of the awful examples used for fat-shaming. And of course, there’s more!

We have to admit, for years, women have always been chased by the idea that the perfect body has to look like a Victoria’s Secret model’s figure. Which, a lot of the times, have led so many ignorant and just horrible people to actually bully any woman who doesn’t fit the criteria.

As time progressed, bullying women for their bodies has never vanished from existence. On the contrary, in the modern world, especially in modern- Egypt and the Middle East, women are now being hated on for having thin and non-curvy bodies as well.

Because now, what turned out to be ideal for them, and by ‘them‘, we, unfortunately, mean a lot of Arab men, is a curvy body, and anything else is immediately referred to as flat and sometimes even, undesirable.

The question here is why? Why are words like curvy, flat, skinny, and fat are always haunting women and chasing them down no matter what?

Why do many people think they have a say and opinion in what a woman’s body should look like? The only explanation is that for so long, women have been treated as objects and every time we think such a concept will stop existing, it simply doesn’t.

The Twitter debate we were referring to above was about what’s worse; being fat shammed or skinny shamed? But the real debate should always remain about why would anyone have the audacity to comment on another’s body.

So in conclusion, it’s not about undermining one struggle to make the other seem more severe – because, simply, nobody wins when we admit that fat-shaming is more common and hurtful or vice versa. Bottom line is, we should all stand in the face discrimination and bullying in all their forms.