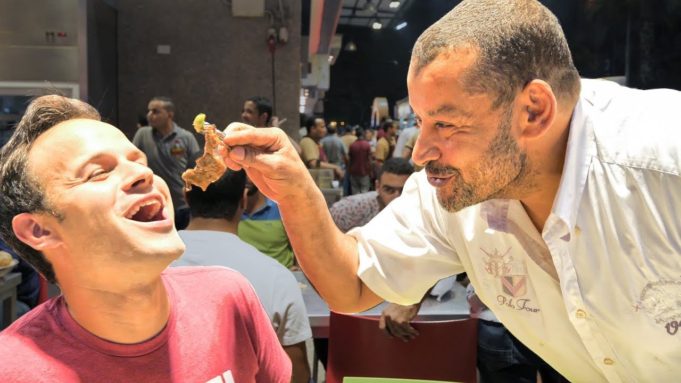 In an attempt to unravel the rich food culture in Egypt, the Canadian vlogger Trevor James “The Food Ranger” visited a number of traditional Egyptian restaurants in Cairo and Alexandria. And man, he was blown away!

Actually, the guy deserves some respect for his choice of restaurants, which were not the choices of a typical tourist but of a true Egyptian citizen craving some additional KGs to his weight.

In Alexandria, The Food Ranger visited two breakfast spots; “Alban Swissra” which he described as an “Egyptian cheese fondue place” and Alexandria’s Foul King, “Mohamed Ahmed”. Then he headed to Alexandria’s impressive public fish market, which many Cairo residents didn’t even know existed. Wherever he went, he was greeted by the street seafood vendors’ welcoming smiles.

It is worth mentioning that Egypt is one of the few countries he visited whose simple street vendors actually understood English!

He ended his visit with a traditional liver and sausage sandwich at Kebdet Sami. His reviews were the evidence that his visit to Alexandria was remarkable as they did not go below 7.5!

In Cairo, he gave his taste buds a unique teasing with Molokheya, Feteer, Foul and Falafel as well as Egyptian Shawerma. El Brens himself welcomed James and served him a variety of remarkable mouth-watering beef dishes.

If you watched his videos, you wouldn’t be able to resist the urge to take your car and go pay these awesome restaurants a visit. But Trevor! If you come to Egypt again, how about trying some Egyptian desserts? Basboosa from Koueider? Maybe some Rozz Bellaban from El-Malkey? Soubya from Soubya El-Rahmany? And if you still want to try more Egyptian savoury food, then go for Baba Abdo, Kaber Sobhy, Kebdet El-Fallah and maybe some Kebab and Kofta from El-Refaay? And maybe take us with you?