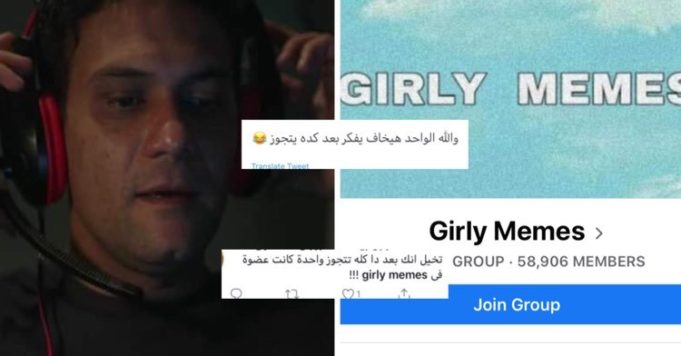 Despite the fact that the Covid-19 crisis took over our lives, social media platforms are infuriated with the news about a certain group called “Girly Memes” on Facebook.

If you’ve missed the story, here’s a recap. And here’s how some people are using the digital space at hand in threatening, defaming, and coercing others, just because they can.

“Girly Memes” was just another private Facebook group for girls out there, until one day it wasn’t. A couple of days back, calls of warning were everywhere on Facebook, giving girls a heads-up and asking them to leave the group.

Turns out, the admin is SOME GUY who has been collecting the girls’ data of pictures, private questions, and even sarcastic comments. Only to blackmail them and in some cases, he did actually send this data to their husbands or families.

This is the comment some people left as a reaction to the incident. Let’s analyze that, shall we? So according to this line of thinking, it’s okay to blackmail someone who only wrote a laid-back comment to their friend on a private group? A private girls only group, that is supposedly a safe space.

Let’s even assume the girls have been posting sex-related questions. Where’s the harm in that? Why would someone take that as a justifiable excuse to intrude on someone’s privacy like that?

Knowing, of course, that the majority of girls in the Egyptian society are not at liberty to express their sexual preferences, jokes, or merely their wonderings online. And, the mere idea of such screenshots being viewed by their families is basically a DEATH PENALTY.

Sadly, if the parents or loved ones were understanding enough, as they should, of course, society definitely won’t be. These sample comments of victim-blaming scenarios are a perfect case in point.

If you’re a girl who has been blackmailed, coerced, exploited or cyber-abused in any form, know that there’s nothing to be ashamed of and that you can break the chain of harm by speaking up. Take this girl’s story for inspiration!

Let’s always remember that digital space is a great means of communication, but it’s also a fresh ground for abuse.

STAY SAFE OUT THERE, LADIES!