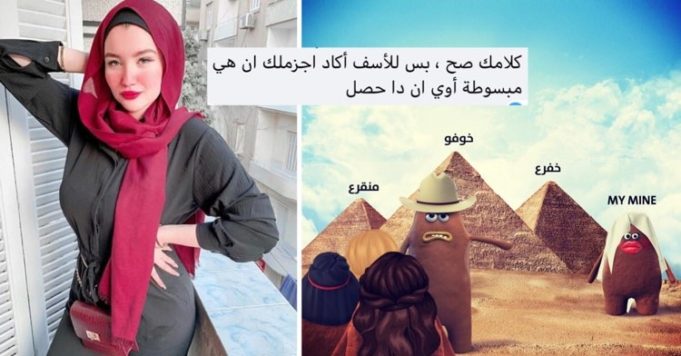 On the account of quarantine, TikTok became the new “in”. Now, this one application we used to dislike and regard as weird is the newest trend everyone (including celebrities) is using and raving about.

One of the names that pop up as the new “trend” on TikTok is Haneen Hossam. A girl, who in a matter of days, became the number one trend in Egypt. But it’s not for making cool videos or having a certain talent for instance, but merely just out of controversy!

We’ve all seen it. People on Twitter, Facebook and Instagram making fun of her so-called photoshopped pictures, her taste in clothes and music and finally the way she speaks English.

It all started with this one video, where she explained how an English phrase “My Mine” she used earlier is actually correct, despite what those who made fun of her on social media were saying.

And within a few hours, celebrities and influencers everywhere used “My Mine” as a funny caption on their pictures to keep up with the trend. The thing that later led advertising agencies handling the accounts of big food manufacturers and restaurants like Edita, Dunkin Donuts and Mori Sushi to do the same as an advertising tactic.

And now, a debate is raised. Whether what started as a trend and a joke about someone’s poor use of the English language has now turned into cyber-bullying?

Honestly, this whole dilemma has made us wonder. Is it okay to make fun of someone and call it a trend? Is using it as a marketing strategy considered legitimate advertising?

Does the fact that Haneen herself is actually more than okay with the whole situation makes this acceptable and inoffensive? All is fair with trends and social media? Where do we draw the line here?