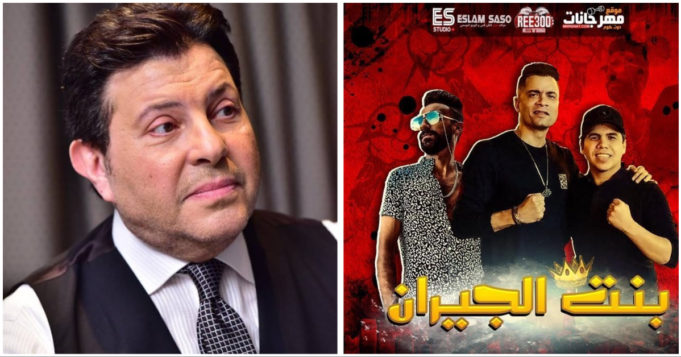 Over the past couple of weeks, Hassan Shakoush’s “Bent El-Geran” has been doing phenomenally well; from people playing the new Mahragan hit literally everywhere to the song ranking number two globally on Sound Cloud!

The veteran Egyptian singer described the new Mahragan’s lyrics and words as ‘vulgar‘, and of course expressed his disappointment that this is the kind of music that appeals to the audience nowadays.

Honestly when it comes to Hani Shaker’s opinion on trends and whether or not Mahraganat are considered a form of art, like everyone else, we face a big dilemma.

We could easily say that we also don’t see “Mahraganat” as a form of art. But how can we tell? Maybe they are. At least for those who are passionate about making them.

Playing this type of music in our cars and weddings doesn’t automatically mean we appreciate it though. It’s simply all about how the Mahraganat’s fast-paced rhythm makes it easy for people to memorize the lyrics and want to dance to their tunes.

That being said, art or not, the syndicate’s recent announcement about Mahraganat musicians finally becoming members but with very limited rights and benefits is all kinds of shady, but we sort of get the point.

For example, they won’t be allowed to vote or ever nominate themselves as candidates in the management board. Which a lot of people can see as unfair.

But in reality, if you look back at how Egyptian music originally started out and compared it to what it has come down to, you’ll definitely understand why.

So in conclusion, it’s true that we’re in no place to say what could be considered as art and what cannot. In fact, art is actually very hard to define these days. Because performers keep creating and inventing new and revolutionary things that a lot of people often disagree on. And that’s fine.

However, the real dilemma lies in how Hani Shaker is constantly attacking Mahraganat singers as well as how the syndicate is planning to strip them of their legal rights. Is it fair? Tell us, how do you guys feel about this? Which side are you on and why?