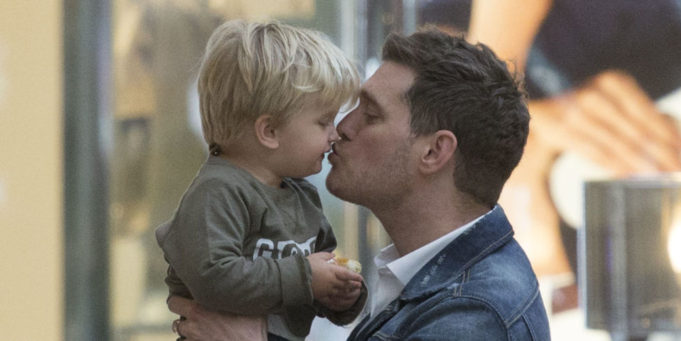 In his interview with The Daily Mail, Canadian music star Michael Bublé announced his retirement from music, declaring that his next album “Love” will be his last. He came to this decision due to his five-year-old son’s, Noah, battle with liver cancer.

Noah is one of three children of Michael Bublé and the Argentinian model Luisana Lopilato.

He was diagnosed with liver cancer 2 years ago and is currently in remission which is a huge milestone and a good sign for any cancer fighter. However, Bublé stated in his interview that the tough journey he went through with his son’s sickness changed him as a person and made him reconsider many things, including his career.

“My whole being has changed. My perception of life,” Bublé told the Daily Mail.

The 43-year-old explained how the diagnosis made him realize he had become fixated on his own success and can no longer bare or deal with “the celebrity narcissism”.

However, after the good remission news, Bublé began making music again about a year ago and his new album “Love” is set to be released next month.

“There are three reasons I wanted to do this album” he said.

“One, because I felt a debt of gratitude, deeper than I can explain, to the millions of people all over the world who prayed for us and showed us compassion. That gave me faith in humanity.”

“Two, because I love music and feel I can continue the legacy of my idols. And three, because if the world was ending – not just my own personal hell but watching the political turmoil in America and watching Europe break up – there’s never a better time for music.”

He has also been working with James Corden on a Carpool Karaoke special edition for the Stand Up To Cancer fundraising campaign.

At the end of his interview he dropped the heartbreaking news: “This is my last interview, I’m retiring from the business. I’ve made the perfect record and now I can leave at the very top.” He chose to stop at four Grammys and a 75 million record sales, at least so far.

“I don’t know if I can even get through this conversation without crying. And I’ve never lost control of my emotions in public.”

There is no experience as life-changing as parenthood, with all what it entails, and Bublé is a live example. Our hearts, thoughts and prayers are with Noah and all cancer fighters out there, hoping that soon they will be winners.