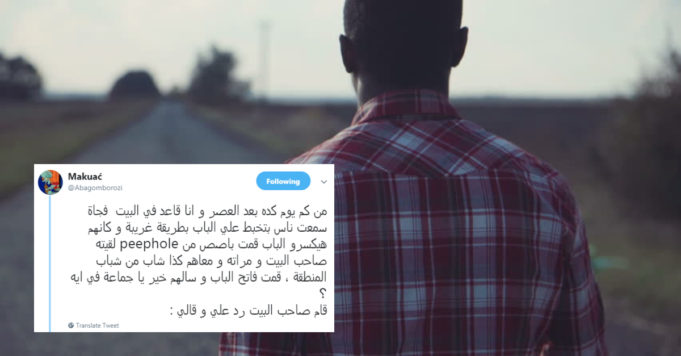 While we are happy to be celebrating the Africa Cup of Nations and the beautiful spirit of the championship bringing all of Africa together, we are saddened by some sideline stories that don’t really reflect the same spirit.

And we happened to stumble upon one of those stories in a Twitter thread that truly shocked us all. And not in a good way.

In a series of 14 tweets, Kenyan Native “Makuac” -as his Twitter name says- told the story of what happened to him a couple of days ago turning a regular afternoon to one of the worst days of his life.

To get you up to speed, here is the gist of the story:

A couple of days ago while Makuac was hanging out in his rented apartment, the landlord, his wife, and a couple of other guys started pounding on his door aggressively.

When Makuac opened the door and asked what’s happening, his landlord accused him of “having a girl” in the apartment and asked him to bring her out and evacuate the apartment immediately.

According to the tweets, the process of the accusations involved severe verbal assault from both the landlord and his wife.

When Makuac denied having anyone and asked for an explanation to just what the hell is going on, they tried to forcefully break into the apartment.

And when Makuac tried to stop them, they hit him, slapped him, then held him against the wall while the rest of them searched the apartment trying to find this girl.

Even though, this “arrest task force” kept searching for this girl but there was no one in the apartment, they kept assaulting Makuac and accusing him of “hiding” her.

In the meantime, the neighbors started gathering around this humiliating scene wondering just what in the world is going on!

And that was when the girl they were talking about appeared.

Not in the apartment. But among the rest of the building residents. So unsurprisingly, the apartment owner and his “gang” rushed to interrogate this girl about who she is.

That’s when they found out that she is just a regular girl coming to visit a FEMALE colleague who happens to be live in the same building.

Why were they so sure she is going up to Makuac’s apartment?

Because he’s Kenyan and she’s Sudanese.

Or, because they both have dark skin.

After realizing that they’ve made a mistake -to say the very least-, the landlord and his crew were shocked and didn’t know what to do or say. So they left in silence.

And because Makuac was incredibly distraught, he also went back into the apartment in silence. He instantly started packing his stuff to clear the apartment, and that’s when he found that while those people were “searching” the apartment, they have completely wrecked the place, worse, they also stole money from Makuac’s closet.

As Makuac was getting ready to leave and ask for his money back, he found the landlord, his wife, and two of the guys that assaulted him minutes ago going up to him and apparently apologizing for “the misunderstanding” that happened.

Yes, they called it A MISUNDERSTANDING!

Obviously, Makuac refused their apology and demanded his money back. They completely denied taking anything from the apartment, aggressively.

So Makuac gave up and headed for his embassy to look for someone to help him file a report against those people who robbed and assaulted him. After telling an administrative in the embassy what happened, Makuac was told there was a meeting and he’ll have to come back in the morning.

So Makuac left and went back the next day. However, the same person he told his story to pretended he’d never seen before and asked him to -AGAIN- tell him what happened and they’ll be calling him tomorrow.

That’s when Makuac knew there was no hope, and booked a flight back home.

Makuac’s graceful attitude after it all

After people started taking notice of Makuac’s powerful story, Makuac wrote another tweet thanking everyone who showed him sympathy and compassion after the traumatic experience he’s gone through.

More importantly, Makuac made sure to state that he will never hate Egypt or Egyptians for what happened to him at the hands of some of them.

All the things that are severely wrong with what happened to Makuac?

A. It is illegal to break into people’s homes, even if you are the landlord. If you rent it out, it becomes the legal possession of the tenant.

So if you have proof that your tenant or anyone else is conducting illegal activities in their apartment, the only thing you are allowed to do is report them to the POLICE. Then it is out of your hands.

B. There is more than one reason a woman could go visit a man. Care to know the reason? Here’s an idea, JUST ASK!

C. Well, I don’t really know how to put this. BUT PEOPLE DO NOT TRAVEL IN PACKS. ANY PEOPLE. Black, white, Asian, Latino, Arab, or otherwise. People are not wolves, they don’t travel in packs.

So just because two people have the same skin color, it does not mean that they must be in some sort of accomplice. They are just two regular strangers who happen to have one single thing in common.

D. Last but not least, the color of someone’s skin DOES NOT DEFINE THEM. Therefore, treating a person according to their race or the color of their skin is pure RACISM.

More so, treating them differently than you would any other person or even categorizing them is basically re-instating segregation which took decades to end. So please stop taking humanity a hundred steps backwards!

On behalf of everyone here in Egypt, we sincerely and truly apologize to Makuac, the Sudanese girl that was wrongfully accused, and everyone and anyone who was offended by this incident.

But please note, this does not, in any way, represent the Egyptian mentality or ethics.

Everyone from all over the world always has been and always will be welcome in Egypt.