Identity Magazine
Home Trending Here’s How This Saudi Girl Got Justice After Being Expelled For Being...
Facebook
Twitter
Google+ 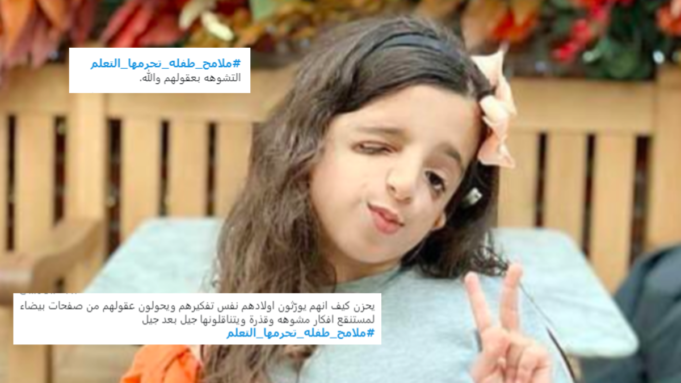 In a period where everyone talks about bullying and discrimination and how to stop it, you’d expect most to be aware by now.

Sadly, this wasn’t the case and third-grader Loulwa bint Mohamed Al-Fareeh had to figure that out the hard way.

No, It Wasn’t Even A Misunderstanding

You might be thinking that this couldn’t have really happened because, well, it sounds plain horrifying. The Saudi schoolgirl, who has Treacher Collins Syndrome, and her family were even more shocked by the news.

Loulwa’s mother said she and her daughter were insulted by a student integration employee. It didn’t stop at that.

The same employee went as far as highlighting the discrimination and saying that Loulwa wouldn’t be accepted in any school because she doesn’t have eyes and ears and will scare her classmates.

It’s important to note that the young girl has eyes and ears but they’re deformed because of TCS, which affects eyes, ears, cheekbones, and chin.

Loulwa has just transferred from a school in London, where she had had no previous issues regarding her syndrome.

Her mother highly stressed that the school abroad provided her daughter with everything she needed and didn’t try to bully her out of their ranks like this Saudi school did after a two-day trial period.

That’s not all. Because she was expelled at a late date, Loulwa wasn’t allowed to re-register for the current school year.

This Tuesday, after Loulwa’s mother reported her case to the Ministry of Education and the Saudi Human Rights Committee, Minister of Education Dr. Hamad Al-Sheikh ordered the re-registration of the young girl to another school.

The minister also specified that the student will not take an entrance exam for her new school and that she’ll be guaranteed a spot in class. He also said that the ministry is investigating the case.

Dr. Al-Sheikh wasn’t the only Saudi to take a stand. Several other Saudis took to Twitter to express their support for Loulwa as well as their anger with the school system for even allowing this to happen.

Naturally, we can’t help but agree with the statements in these tweets. No one should be denied an education for any sort of reason and no one should be told they look “scary” because they look different. Especially not a child.

We hope this incident will be the last of its kind.