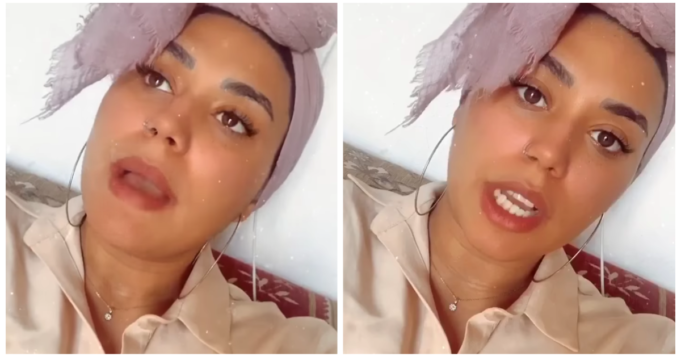 Over the weekend, a video of social media influencer Mai Ibrahim bashing Facebook girl groups has gone viral, and needless to say, it sparked some controversy for very understandable reasons.

While making fun of the usual and repetitive kind of posts we often find on such groups, Ibrahim may have gone a bit too far with the way she addressed the matter. As she targeted very specific tones and even expressions a lot of the girls on those groups usually use.

The social media influencer made fun of the girls who would make some “show me some love” posts, spark debates for the sake of conversation, and ask others to photoshop their pictures or even seek advice on serious matters.

After opening up the topic on her Instagram stories, she also posted the video on both Facebook and Instagram with a caption that implies that the actions of those girls only prove they have no friends and are basically seeking validation and attention from such groups.

The thing is, Ibrahim is totally within her rights to find those groups, those girls, and those kinds of posts annoying for whatever reason in the world. And actually, for some reason, a lot of people do. Not everyone is a fan of girl groups or whatever goes on within them. And in the end, everyone is entitled to their own opinion.

However, it’s very brutal to straight-up shame the girls who actually like to engage in online communities and claim they’re either seeking validation or have no friends as Mai captioned it.

Because actually, yes, a lot of people do find comfort in those girl groups. Some would even have their really bad day entirely turned in a blink of an eye when they get a nice comment about how they look when they post their pictures on those groups.

Not to mention that some do end up forming friend groups from those online communities. Which is definitely not a bad thing!

A lot do really need the advice; whether it’s about a breakup, a toxic relationship, or even as simple as a fashion tip. And there should be no justification. Those online communities are meant to create a sense of belonging – a support system if you will. And there’s absolutely nothing wrong with that.

As mentioned earlier, yes, some people do find that annoying – men and women. That being said, they’re totally free not to partake in them or comment on said posts in any way, and that includes not shaming members in public.

What do you guys think? Do you agree with Mai or do you feel that those girl groups are actually healthy online communities that promote girl power and create support systems?