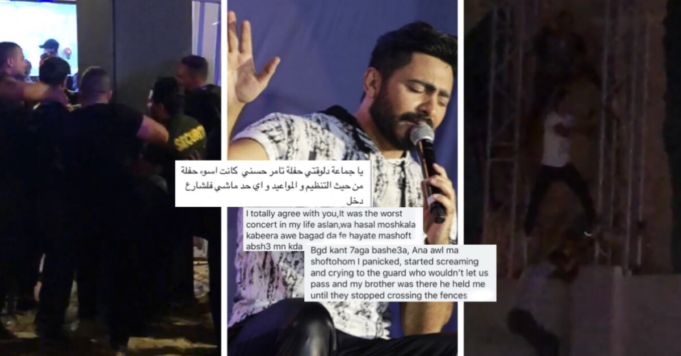 Hosny posted on his Instagram account thanking everyone who came. But what really caught our attention is how he praised the ‘prestigious‘ organization of the concert and how impressive it was. But as for us, attendees, we were not quite impressed.

And here’s why we have to strongly disagree with the pop star:

As fans who attended the concert, and as excited as we all were, we’re sad to say that we were pretty disappointed.

And, unfortunately, ‘disappointed‘ doesn’t even begin to cover it.

From the horrible organization to the exceptionally late appearance of both the opening act and the superstar, in addition to the sexual harassment; it was a total mess.

Well, where do we begin? It says on the ticket that the gates open at 4:00 PM. Which is, to be fair, the same as every other concert, anywhere in Egypt. 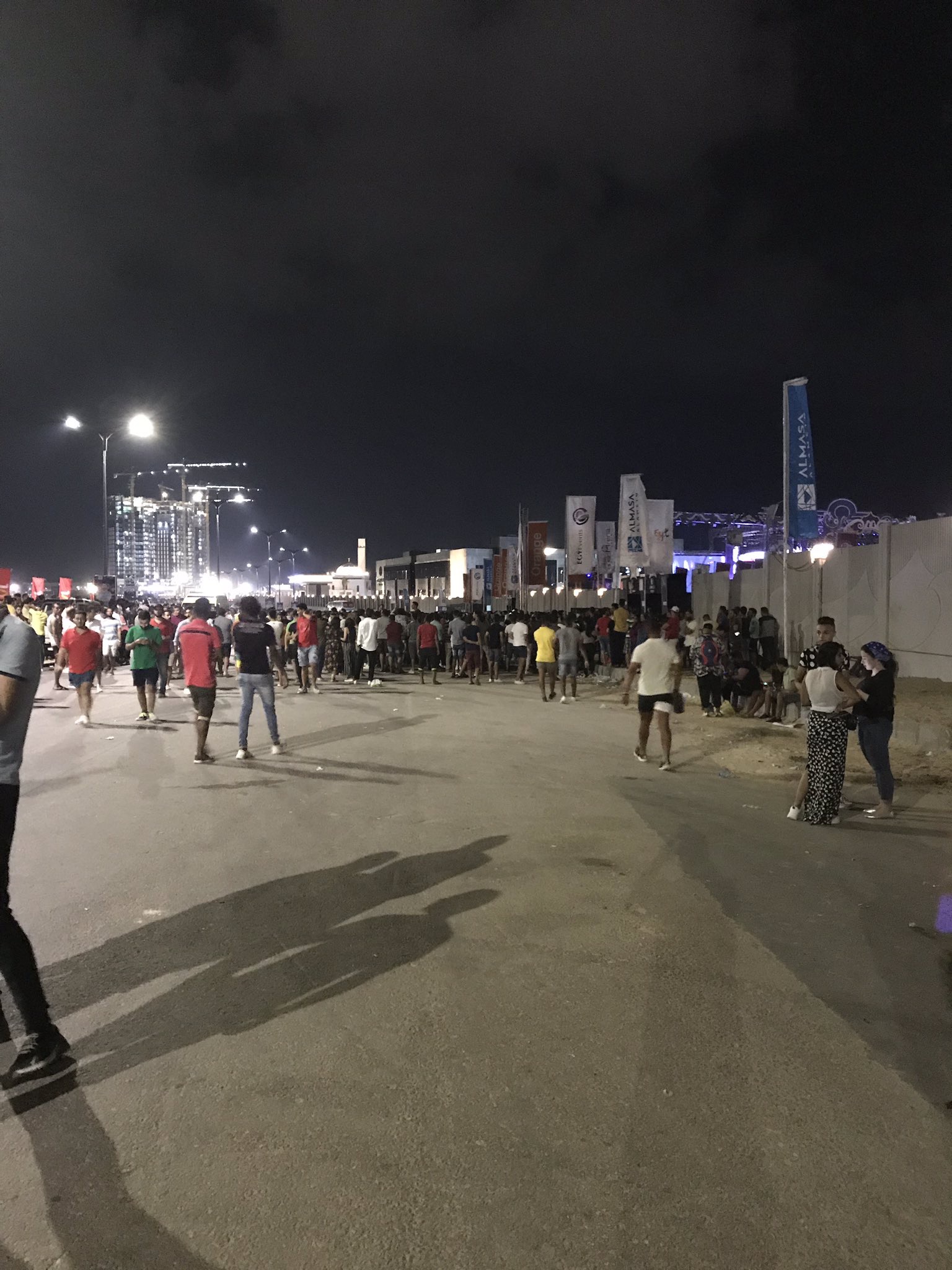 However, the gates did not really open at 4:00 PM. And everyone who came early had to still stand in the line for over an hour until we all finally got in at around 7:00 PM.

To say that people were on top of each other is an understatement. And it’s not a metaphorical statement. That’s what literally happened!

As we walked through the gates that led to the Gold tickets category, things didn’t seem so awful at first. The area where we were standing/walking wasn’t too crowded.

However, less than an hour after our entrance, we found ourselves stuck in the middle of at least 10 people on the same exact spot.

It was like everyone was basically forced to be in some stranger’s arms in order to be able to stand still.

Personal space what? We were literally struggling to breathe. Some of us actually needed an inhaler. No kidding.

That physical closeness became even worse when the concert began, with some people resting their hands on your shoulders to be able to take videos. But, we’ll get to this part later…

Whenever anyone tries to ask the ushers about/for anything, they ditch them. A very horrible example of that is when people who were initially standing in the Silver category sneaked to the Gold one. Same when some of the ones in the Gold area sneaked to the category after.

That happened in front of everyone, for the entire concert. And it was dangerous towards the end. People kept complaining to the ushers only to receive replies such as “It’s out of our hands, it’s too crowded, we can’t do anything about it.” 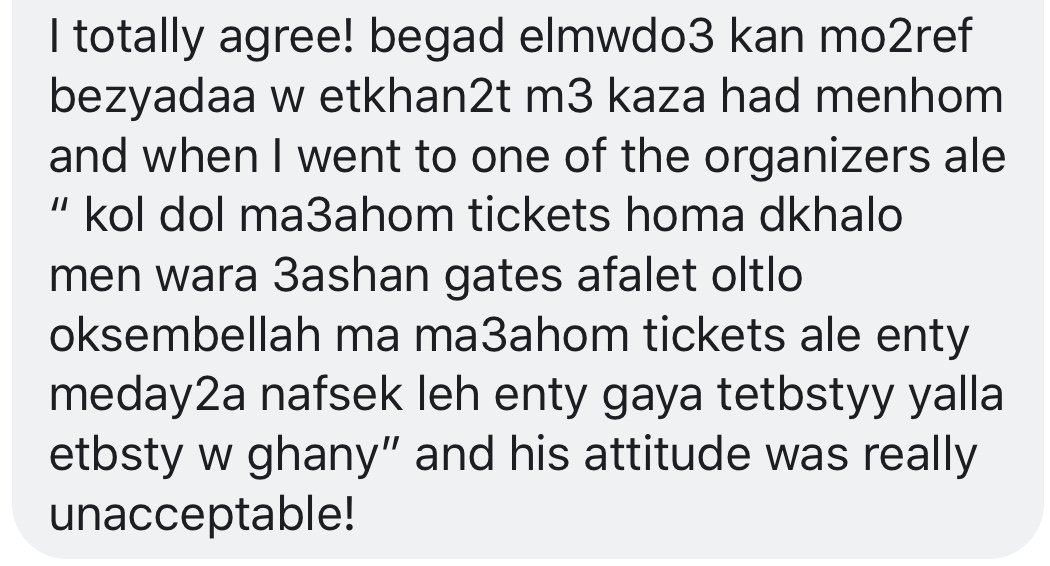 Because the ushers didn’t interfere to stop the chaos, several fights started between the audience members.

Which leaves space for the opening act that Hosny himself announced on Instagram, Gypsy Kings.

As we were standing outside in the entrance line, we overheard multiple officials and security members say that Hosny was going to appear on stage at 10:00 PM to sing for two hours.

To sum this up, we waited for Tamer Hosny in a hot crowded and chaotic space for over 6 hours. That’s of course apart from those who went earlier to reserve a spot up front, closer to the stage.

By the time Hosny actually appeared, the audience was either gasping for air or trying to sit comfortably on the ground because of how bad their feet hurt from standing for too long.

And what made things even harder was how it seemed like no one even cared about the long torturous hours we spent waiting for anyone/anything to happen on stage.

It’s also infuriating how we received no apology whatsoever, from anyone.

This is the worst part of it all. And we deeply regret that we have to even tell it, because it directly affected us and we’re still all shaken up.

As the concert began, right after Hosny started performing, sexual harassers began spreading everywhere, touching all the women. It was like all the men agreed on groping all of us.

Most of the inappropriate touches were attributed to ‘how there was no personal space‘. And if you shout or ask the guy to move away from you; not only him but other guys surrounding him as well, they would reply with “What do we do? Where do we stand? It’s crowded and we’re having a hard time too” as a justification.

That’s in addition to the horrifying stares we got as our bodies were being looked up and down, for the whole time.

Unfortunately, again, that’s not even the worst thing that happened. Because one of my very own friends was physically assaulted.

A 30-something year old man had the nerve to grab her behind as the concert was ending.

“I was walking out of the concert during the last couple of songs in order to avoid the crowds. It was 2:00 AM, my friends and I were holding on to each other as we made our way to the exit door,” said Aliaa Hegazy, 22.

“All of a sudden, I felt my a** being grabbed and squeezed quickly. That’s when I immediately looked back and started screaming trying to figure out which one of the four guys behind me did it,” she added.

“It wasn’t much of a surprise when every single one of them started being defensive while shouting that no one did anything. That’s when I lost it and strongly pushed the one who was right behind me and most likely did it,” explained Hegazy.

According to the 22-year-old, they started touching her even more trying to get her not to cause a bigger scene when some of the sexual harasser’s friends told her to let it go and forgive the guy, admitting he did it.

At some point in the concert, before Hosny even appeared, we were standing in the Gold area when one of ‘the ushers‘ started hitting on me.

He was standing right behind me with his hand too close to my waist. And it wasn’t long until he started offering me to accompany him to the VIP area – as he had the official pass – and ditch my friends.

And once he got the hint, since I looked too uncomfortable and was not answering him as he addressed me, he moved to a group of girls who were standing right next to us.

Thankfully, they started raising their voices telling him to move away because he was standing too close as he gazed at them. Just like every single guy at this concert, honestly!

The Last Bits of the Chaos and Violence…

Towards the end of the concert, around 2:30 AM, the security members started decreasing in numbers until there were absolutely non existent at the gates.

That gave so many Arab burglars who lived around the area the opportunity to not only cross the gates without tickets or inspection, but to also jump on people and step on them. For real!

According to 18-year-old Amina Ahmed, who made a post on Miss Basket’s closed Facebook group, when she tried to ask for help and tell one of the security members to put an end to this, they refused. 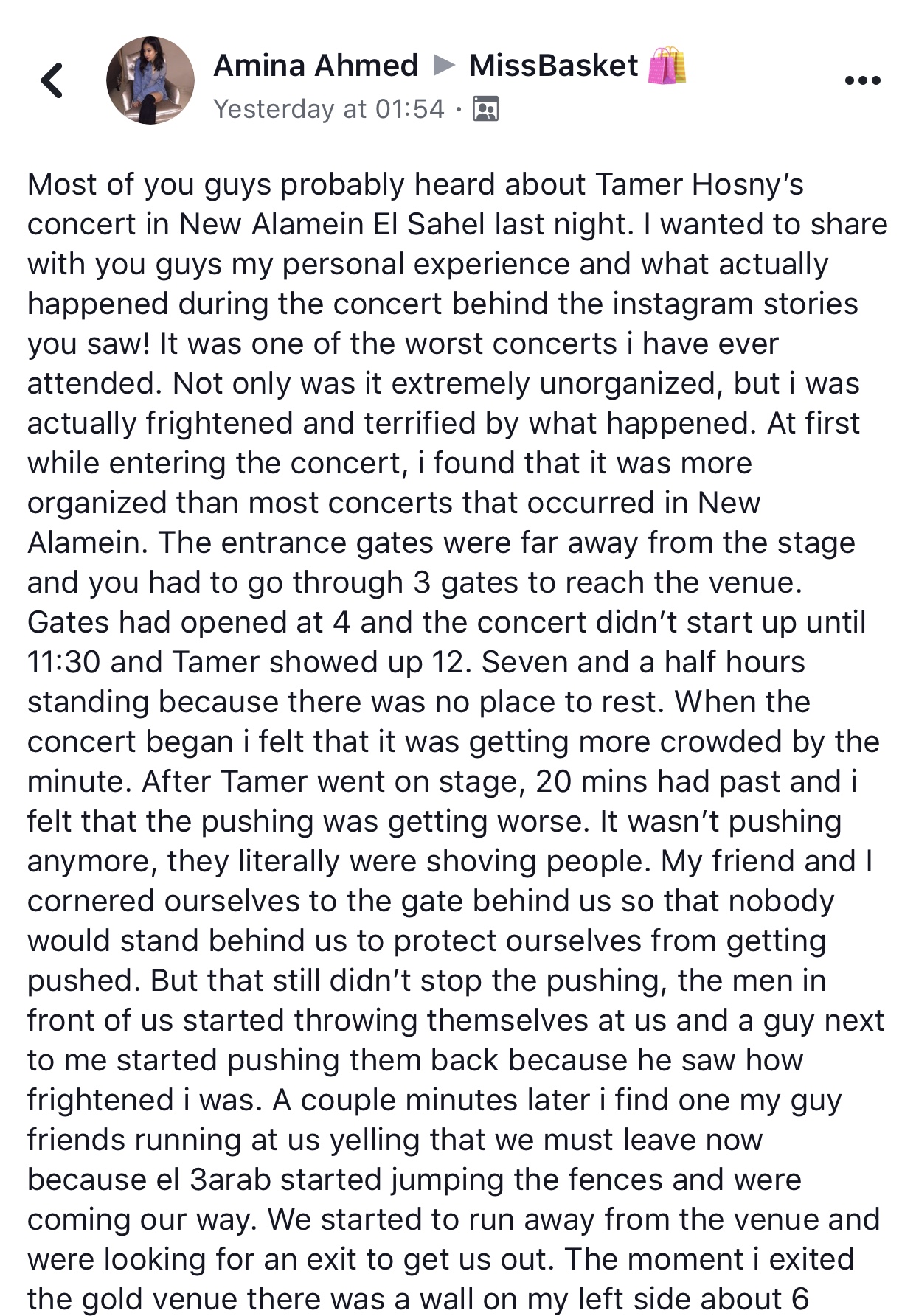 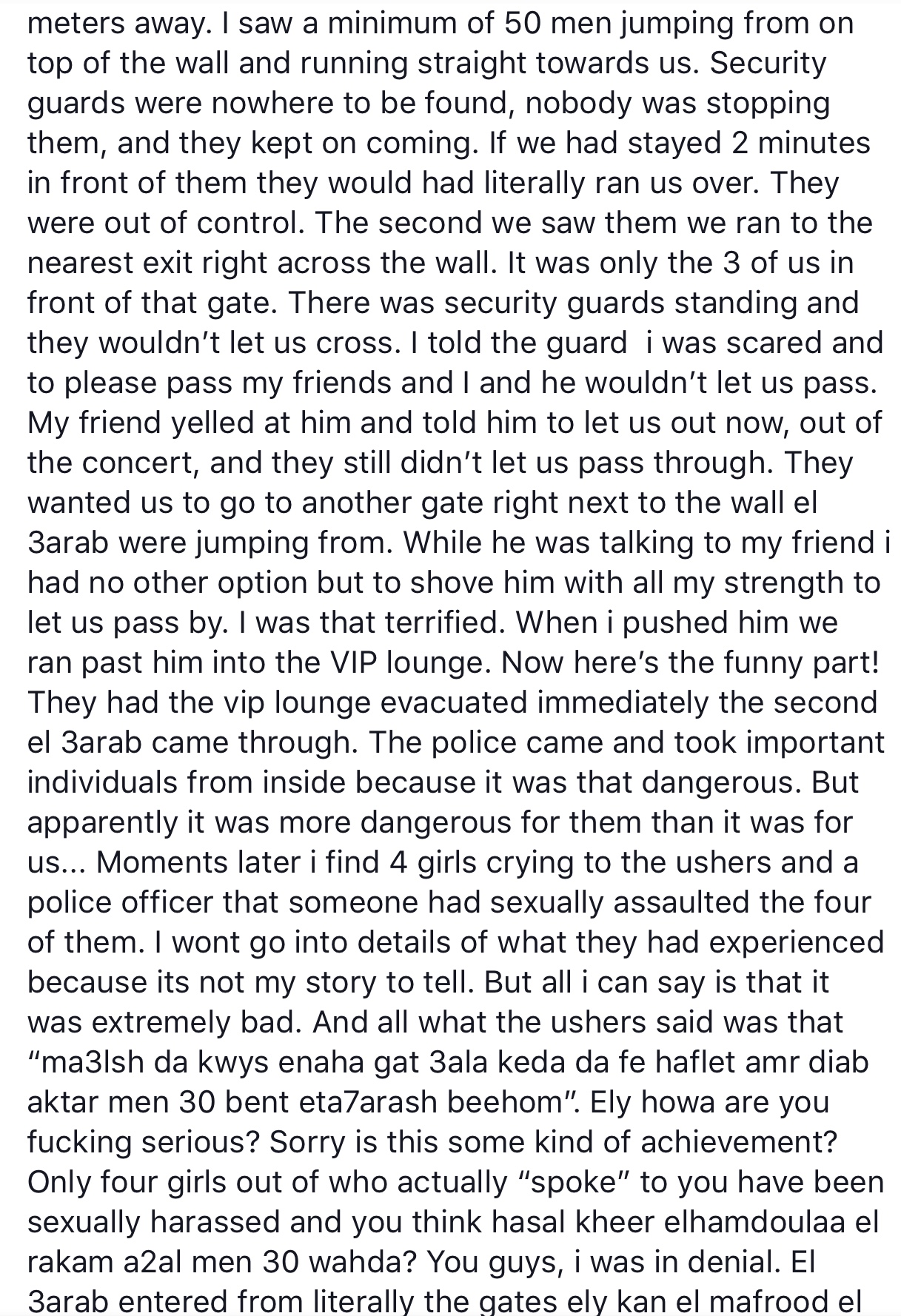 That’s in addition to how he refused to let her in the VIP area as she tried to escape the Gold category that was being vandalized. So, they were pretty much only protecting the VIPs. 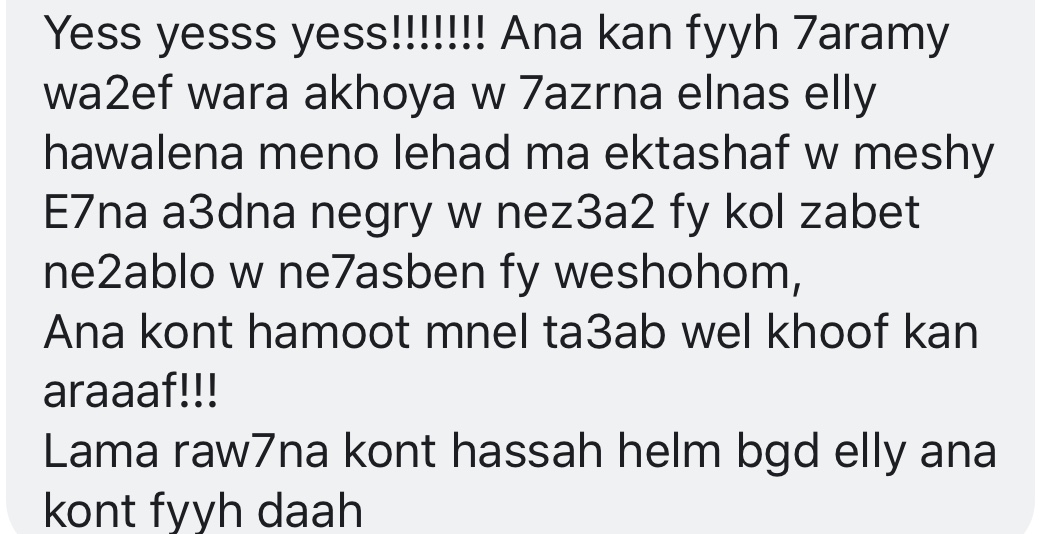 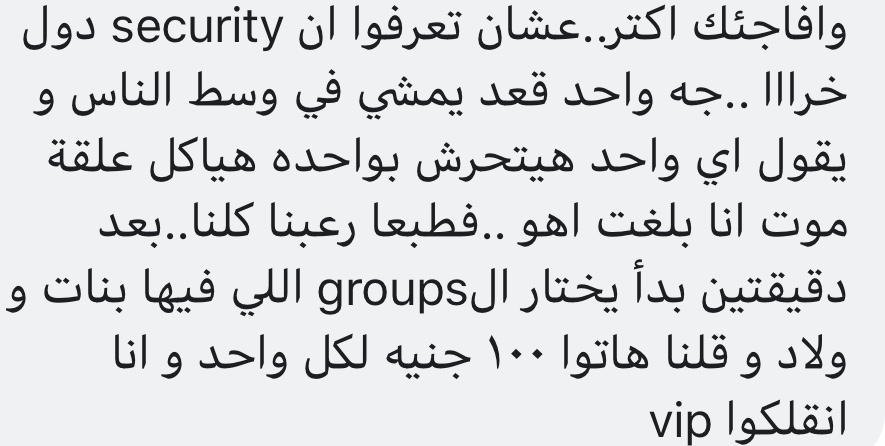 Needless to say, so many people already agreed with Amina – including us – after first handedly witnessing what happened.

From the entrance gate, the six painful hours of wait, to the series of absolutely chaotic events that went down towards the end and most importantly, the sexual harassment; we just have no more words. It was a horrific experience that we hope no one has to go through.

We love Tamer Hosny and the rest of the Egyptian pop stars and would like to always be able to go and enjoy their concerts. But seems that this won’t be happening anytime soon, if this carelessness and lack of professionalism continues.

If any of you guys went through a similar experience at a different concert or even the same one, please don’t hesitate to share it with us.