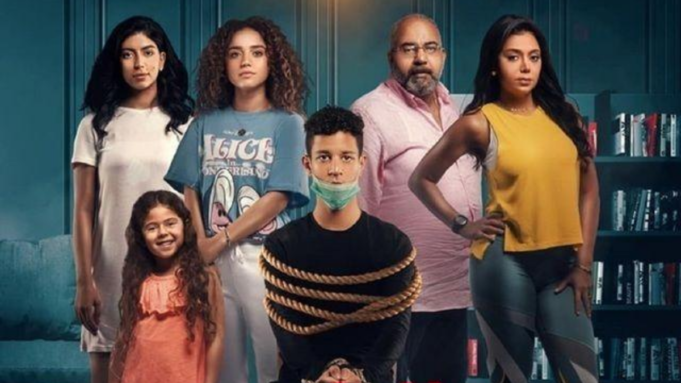 At least, until now. With the new-wave of Egyptian TV shows making its way onto streaming platforms, it has been no surprise that we’ve seen our creators delve genres like the mini-series and much more!

But, wait — can the mini-series actually work for Egyptian audiences? You’ll only find out in this review of El-7aramy.

Warning: will have spoilers

The story begins with the introduction of our main character, Kamal (Ahmed Dash), who is an orphan with only one friend, Haitham, that he looks up to as a brother. The thing is, this brother-figure wants Kamal to join him on a home robbery, even though the kid is clearly hesitant.

On the night of the robbery, the duo break into a traveling family’s empty home and look through it before they’re interrupted by one thing they didn’t take into consideration. The family’s early arrival. Predictably, things go haywire when Kamal is abandoned by his friend and is stuck inside, with the family all quarantining in because of the Coronavirus.

Yeah. And to up the suspense a notch, we have Tarek (Bayoumi Fouad), whose overprotective nature is compounded by the virus regulations, and Rania (Rania Youssef).

This is all without mentioning the story-lines of the couple’s three daughters, one of whom (Sally, played by Rana Ra’es) is perpetually sick and just as lonely as the thief invading her home, whom she eventually befriends.

One perk of El-7aramy is that it offers us a well-rounded, if limited, cast. We have about 7 characters and a few cameos over video-chat. Of our 7 characters, though, we’re discussing leads Kamal, Sally, and Tarek.

As the titular thief, you’d think Kamal would be portrayed unsympathetically (like most thieves are) but the show does the exact opposite. We get a semblance of who he is — a poor, good-natured orphan who just wants a good life.

And we see that when he saves an old lady from being robbed by a thief, only to be pushed to become one a few hours later. As the show goes on, we see Kamal make a decision on who he wants to be while struggling with his daydreams of a family and not once does it feel like it comes out of nowhere.

While Kamal daydreams of a normal life, asthmatic middle-child Sally desperately wants to escape her own, by any means. And we see how her life is run and how she’s treated with kid-gloves by everyone around her, we get why.

It’s just stifling. So when the incident happens and Sally gets to find a friend who treats her like a friend, she takes that opportunity. It’s also worth mentioning that Sally represents what true human kindness can do, once you extend it to other people.

Bayomi Fouad’s Tarek is, from the get-go, portrayed as a simple dad and the show’s quasi-villain as well. However, this character is easily the best on the show. Every time, he’s on-screen, you see him go through humor to parental to strict to stoic and the end result is that you get the most human portrayal of a dad we’ve seen yet!

Even though El-7aramy has got itself a fairly solid plot (also inspired by a true story) and intriguing characters, we have a bone to pick with the show.

We don’t think the mini-series format, where the longest episode is 15 minutes, works for the show. It just doesn’t. Bite-sized content sounds great in theory (and honestly, it’s amazing how well we know the characters in so little time) but the limited time killed the show’s pacing.

One episode, the characters struggle and the next, they’re already friends with a different dynamic. And we don’t even get a transitory conversation so we don’t see how this can happen. We don’t see how certain characters know certain information; we just see that they do and we’re supposed to roll with it.

Other than these issues, though, the show goes on to give us a decent plot with an ending that’s arguably better than half the Ramadan shows of last season. So, check it out — just don’t try not to lose it over the tiny details after episode 7.

You’ll need to check out El-7aramy…but not because of the bite-sized content.