Identity Magazine
Home Trending In Another One of His Demeaning ‘Jokes’, Tamer Amin Compares Women to...
Facebook
Twitter
Google+ 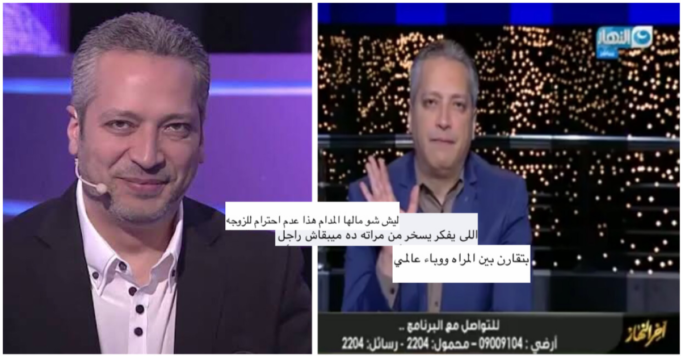 Seems like some people will hardly ever learn. TV host Tamer Amin strikes again and decides to make yet another demeaning comment – or so-called ‘joke‘ about women. And this time, it’s just unbelievable!

In a very recent episode from his talk show “Akher El-Nahar“, Amin was warning people about the novel pandemic that’s threatening all of our lives at the moment.

And while giving tips on washing hands, buying sanitizers and most importantly, staying safe at home; he made some very unnecessary and just straight-up mean comments about women.

We can’t say that this comment was anywhere near unexpected from Amin who’s actually known for making such demeaning comments.

However, what shocked us is that he actually involved his very own wife AND a possibly-fatal virus in this.

Wondering what he said this time? Well, here’s the video:

Rather than just doing his job and spreading awareness, Amin went ahead and compared the Coronavirus to women, wives in specific.

Because he thinks that some men, including himself, will face the ‘huge‘ dilemma of either being stuck at home with their wives to avoid the virus or just going out and catching it.

The thing is, Amin just doesn’t know when to stop. And other than the fact that this is definitely not the time to crack meaningless jokes, he chose to compare housewives to a global pandemic that men would be stuck choosing between. Because it’s the worse or the worst, right?

It’s just surreal that he actually said: “While some men would prefer the Coronavirus over their wives, I think being stuck at home with my wife is better.”

As if we should give him a golden medal for his ‘sacrifice‘!

Seems like the grown-up man just needs to be reminded that the woman or women he’s making fun of and describing their company as “difficult“, are the same ones who raise the children; not to mention simultaneously work, take care of their husbands, the house and much more.

Way to be ungrateful, Tamer!

Back in 2019, during his live interview with Rania Elwani, he ‘joked‘ about how her husband is staying at home and taking care of the children, while she keeps breaking records and holding high positions. And needless to say, he made her feel extremely uncomfortable and just basically undermined her husband’s supportive role in her life on national TV.

So as you can see, it’s not the first time for Amin to be really insensitive towards women. What do you think about his slip this time? A ‘joke’, or just Amin being his natural sexist-self?