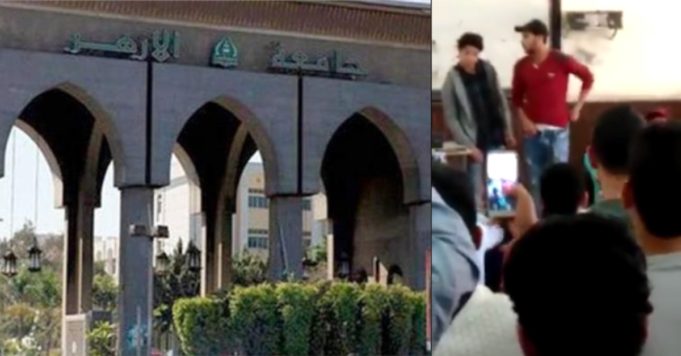 The video shows an Azhar professor ordering two of his students to take off their pants in front of a fully packed class hall. This resulted in the students stripping and the rest of class cheering.

According to the pages who published the video, that professor who has been identified as Dr. Emam Ramadan Emam gave the students an ultimatum, either take off their pants or fail his class.

Warning: The content of the video could be considered graphic or inappropriate.

The video does, in fact, show the two male students standing at the front of the class hall awkwardly fidgeting and plainly hesitant while the professor is seen aggressively gesturing at them to drop their pants.

It can also be seen that the first student who did drop his pants was so hesitant at first that he actually attempted to do then backed down. But later on after his classmates started cheering “Take them off”, he pulled his pants down, moved his boxers down -as if he is giving his classmates a peak-, and then received an “applause” for it.

Yes, he received an applause from an entire classroom (most of which had their camera phones up) for dropping his pants and standing in his boxers center stage of a class hall.

But that’s not the worst part nor the biggest applause of the event.

It wasn’t until that student pulled down the pants of the other student -against his will- that the crowd went really wild.

What happened to that “teacher”?

Shortly after that video started circulating Facebook, it was reported that the professor seen in it has been suspended from work and referred to a disciplinary committee.

So as of right now, he is set to meet the consequences for his actions as seen by the said committee.

It was later known that this professor is Dr. Emam Ramadan Emam, a professor of Islamic Creed and Morals.

Yes, the irony is painfully clear.

After word and footage of the incident got out, the professor responsible posted a Facebook status on his personal account addressing and -supposedly- explaining the video and its content.

In his response, Dr. Emam -who has worked in Al-Azhar University for almost 20 years- justifies his actions by stating that his request of the students was in the context of a practical teaching experiment.

Under the said experiment, Dr. Emam tests the students morals while demonstrating to them the importance sticking to your principals and ethics no matter what.

Which is why -according to him- he tried to entice them by promising that whoever drops their pants gets an A in his class, “to see who is ethically weak enough to do it”.

He also states that this is not the first time, and that to him, this is considered a teaching method, which he explains to the student after he is done.

Dr. Emam does, however, state that this is the first time a student actually takes off their pants, and that usually students refuse even if he threatens to fail them.

The professor then explains that this particular student who dropped off his pants -describing a single person not two- willingly volunteered to take off their pants in exchange of the good grade.

Which from what we see in the footage doesn’t quite fit the description of what did, in fact happen.

The supposedly highly experienced professor states that when the student dropped his pants, he was appalled and shocked, even more so when the student moved down his boxers that he rushed to stand in front of him for cover.

However, a quick look at the video will show you none of the above.

Because according to the video, the only thing that happened after the first student dropped his pants is that he pulled down the other student’s. All while Dr, Emam is seen watching along with a smiling cheering class hall.

It is worth mentioning that the Azhar professor also stated that the student who stripped followed him after class to demand his A, which resulted into the two of them engaging in a physical fight and ending up in the Dean’s office.

Why the reason doesn’t matter?

Whether the reasons for these actions were perverted or “clear” as the professor claims, there is no two ways about it, and it’s unbelievable that it even has to be said; but there is NO ACCEPTABLE JUSTIFICATION FOR ORDERING ANYONE TO STRIP, let alone YOUR STUDENTS.

In fact, even if not ordering, allowing students to drop their pants, pull down each other’s pants, harass each other into taking their clothes off, videotape and cheer on each other for being half naked IN A CLASSROOM still falls on the TEACHER of that class.

Therefore, it should be treated that way. Breaching that code of honor in any way or on any ground CANNOT pass without consequences.