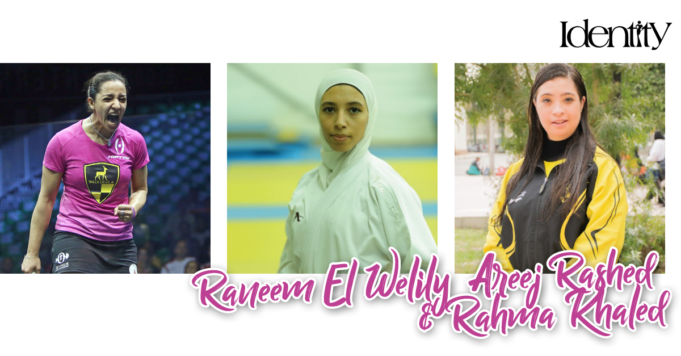 Women are now more visible in sports than ever before. At the 1900 Olympic Games in Paris, where women competed for the first time, only 22 of 997 athletes were women. At the 2018 Winter Olympics, 1,242 female athletes were in action, making approximately forty-three percent of all athletes. Forty-eight percent of female representation is predicted for the 2020 Olympic Games in Tokyo. Female athletes are changing the game and are setting their marks in sports like never before everywhere around the world, in all sports, and in all championships and all international sporting events.

Sports were always a way for women to gain a measure of freedom in societies that greatly inhibited their social choices. For Egyptian sportswomen, things are no different! Sports have always been intertwined with freedom, and our female athletes are breaking through the glass ceiling in the many fields of sport.

From Raneem El Welily, the Squash World Champion and the first Egyptian woman in any sport to become the World No.1, Areej Rashed, Egypt’s Karate Champion and recipient of the highest Sports Honorary Award in our country to Rahma Khaled, the swimming gold medalist in the Special Olympics and the first TV host with Down syndrome; we’re celebrating all the ways women athletes and women in the sports industry are inspiring us to level the playing field. We bring you three inspirational women who are knocking down many barriers when it comes to sports.

The beginning of the three athletes’ journeys was quite similar; the love of sports captivated them, and got their foot in the door. “When I was only four years old, I could never sit still; therefore sports were the perfect solution for a child like me! And once I started Karate, I fell in love with the sport immediately!” said Areej. 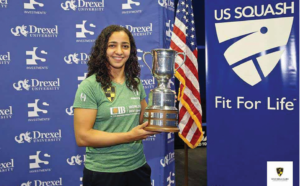 Rahma was an active child too, especially when any water activity was involved, “My mother decided when I was six that I should take up swimming. I was enamoured with it, and by the time I turned eight, I started participating in championships and tournaments. Playing sports has a positive impact on both my health and personality.”

When Raneem picked up the squash racket and hit her first ball, she was following her big brother’s steps. “I used to watch my brother’s training for almost a year, and when his coach let me walk in the court for the first time, even though I was still six, I managed to hit the ball with the racquet on the first try. It was an instant love affair with the sport.”

Those first moments are just highlights of the athletes’ journeys; the three of them had many more victorious moments to share with us. “Winning 6 British Junior Open titles and 2 World Junior Championships in my junior years were such great achievements that paved the way to my career,” Raneem explained. “There are two achievements that I am most proud of, both were during my journey as a professional Squash player with Wadi Degla Club; the first is reaching the world number 1 rank in 2015 and the second is winning the World Championship in 2017.”

“The first time I won a gold medal at the World Championship will remain one of my top moments throughout my career,” said Areej. “I can also never forget my excitement when I received the highest Sports Honorary Award from President Abd El Fattah El-Sisi.” 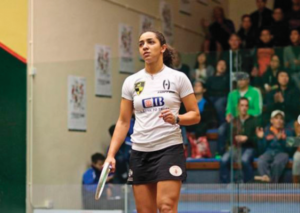 “The achievements I will forever be proud of are becoming the representative and a spokesperson for the International Federation of Sports and the Federal Egyptian Association for Intellectual Disabilities but becoming a TV host definitely tops the list of my achievements,” said Rahma.

The three athletes’ achievements fill us all with pride and leave us in awe for them. They are truly inspirations to women everywhere, and we couldn’t help but wonder, after accomplishing that much if there was any milestone that the athletes haven’t hit in their careers yet, but want to. 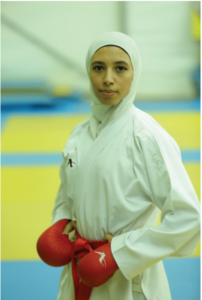 “I would like to participate in the next 2020 Olympics and achieve a gold medal, especially that it will be the first time Karate becomes part of the Olympic Games,” Areej replied with great enthusiasm.

Even after becoming World Champion, Raneem too proves that there should be no ends for your dreams, “I am blessed to have won many titles on tour, but the British Open is one of the majors that I wish to win one day. I hope I can achieve as many titles as possible.” 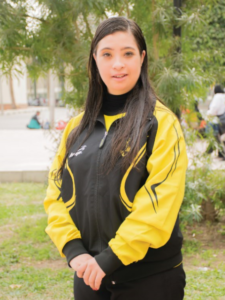 Rahma too had more dreams to fulfill but hers weren’t sports related, “I want to raise more awareness about people with special abilities; that they too can be productive and can make a difference in their societies if given the chance and support, just like I was supported by my family and Wadi Degla Club.”

Knowing it couldn’t be all dandy for these hardworking sportswomen, we paused to ask about the challenges that come their way, the obstacles that they had to face, may still be facing, and how they overcome them or how they are planning on doing so. 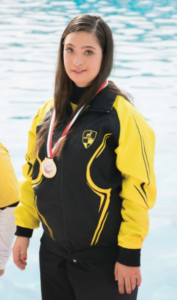 “Lack of sponsorships to some sports is one of the major challenges,” Areej explained. “I encourage the private sector to pay attention to neglected sports. If we take a look, we can see a lot of Egyptian athletes with international achievements in different sports. They all deserve support.”

“The biggest challenge I faced throughout my life is society thinking that people with special abilities can’t lead successful lives, can’t accomplish big achievements.” Rahma explained, “I didn’t let these social limitations get in my way. I broke this taboo as I am a champion in more than one sport. I became a model, a TV host and a representative for people with Down’s Syndrome. I was able to achieve top rankings in all the tournaments I participated in and hopefully will continue to do so.”

Raneen had a different battle to fight. “I believe the biggest challenge is learning what and who to listen to from the people around you, and what advice to take and what to leave behind. That’s what affected me the most while growing up and building my career. I’m sure on some level everyone was trying to help but it wasn’t always effective. You need to follow your own mind.”

After learning about the athletes’ personal challenges, it was time to pop the big question about gender equality in sports. Some believe that we are past the era where women are treated differently than men in sports; some think there is still a long way to go, everywhere around the world, before girls and women, at all levels of sport, are treated equally.

We wanted to hear what our interviewees have to say about the challenges sportswomen face, and if we still suffer from this dilemma in Egypt.

“Unfortunately yes we do,” Raneem replied. “Things are changing though, as more women and girls started achieving records and breaking the norms. We proved that we deserve a fair chance. So yes, over the years, things have improved a lot and we do not face as much gender-based challenges as the earlier generations. But still, a few phrases here and there, that reflect how some people still think of women, are heard every now and then. You just have to train yourself not to pay attention.”

Areej agreed too, “But I am very positive this will change over time. Lately, we have been seeing Egyptian women with major achievements in many sports gain worldwide attention.”

“There are several sports entities that work so hard to develop their champions such as Wadi Degla Club.” Rahma added, “With all these international achievements, I do not think that such inequality will last for long.”

Speaking of inequality, well aware of the long lasting belief that martial arts is considered a ‘men’s sport’, we wanted Areej to tell us how it does feel to not only break into this territory, but also be a champion in it.

“I am always proud of what I achieved; I struggle to accept the notion that because Karate is a violent sport then it only suits men. This is a false perspective; I have a huge respect for Egyptian women who professionally play sports and manage to achieve so much with all the challenges they face. I’m forever grateful to my family and Wadi Degla Club for supporting me and having a massive positive impact on my journey.”

We are forever proud of Areej and the many other sportswomen for breaking this mold; Rahma too broke through the glass ceiling in TV hosting and proved that nothing could stop you from reaching your goals once you put your mind to it and we wanted her to share with us how she achieved this goal.

“It has always been an ambition of mine to have my own program in order to shed light on different individuals fighting life’s challenges, overcoming them and working hard for their dreams to become their reality. My TV debut was last December when Al-Ghad channel interviewed me for the occasion of the International Day of Persons with Disabilities, and I was given my own slot. I was honored with such opportunity, and later on DMC asked me to become a regular slot on TV show 8 El-Sobh alongside Ramy Radwan. In order to be up for the task and prepare for this step, I took up special courses in presenting and media during the months prior to start hosting the show. I couldn’t be happier with my career like I am at the moment.

Those are Areej and Rahma’s keys of success that helped them along their journeys, and kept them going through all the obstacles that came face to face with them. Raneem too had her keys that guided her until she achieved what no other sportswoman achieved in Egypt and became a World Champion. “The keys to success are hard work, discipline and having the right ethics. Hold on to those three qualities and you’ll never fail. Or so I like to believe.”

Such influential and heartening words are the perfect conclusion to our interview with the three incredibly amazing athletes. We wish them all the best in their careers; we couldn’t be more proud of them, and we wish to witness even more of their achievements. Stay awesome, ladies. 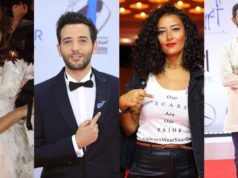 Stars used GFF’s Red Carpet to Support Their Causes, and We Support Them! 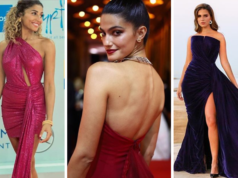 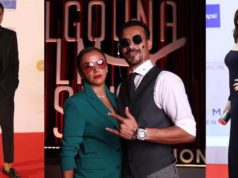 Last Night’s Red Carpet at El Gouna Was Something Else! 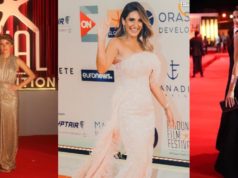 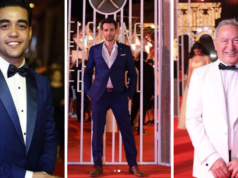 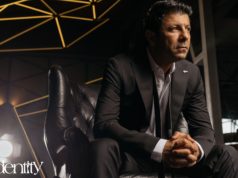 A Conversation with a Self-Proclaimed Joker: Eyad Nassar 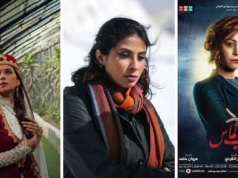 Dear Egyptian Cinema, Where Are All The Women? 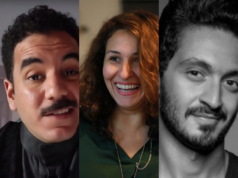 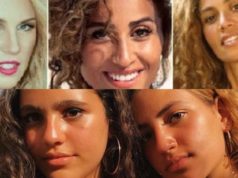 Why Should Women in Amr Diab’s Life Have to Suffer From His Fans? 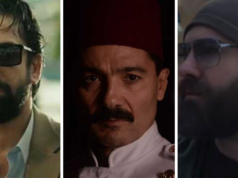 Is Your Life A Mess? You Might Be An Egyptian Male Main Character 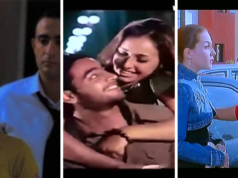 The 7 Worst Egyptian Movie Romances of All Time