Identity Magazine
Home Trending Is Having Corona Now A Reason For Harassment? We Didn’t Think So
Facebook
Twitter
Google+ 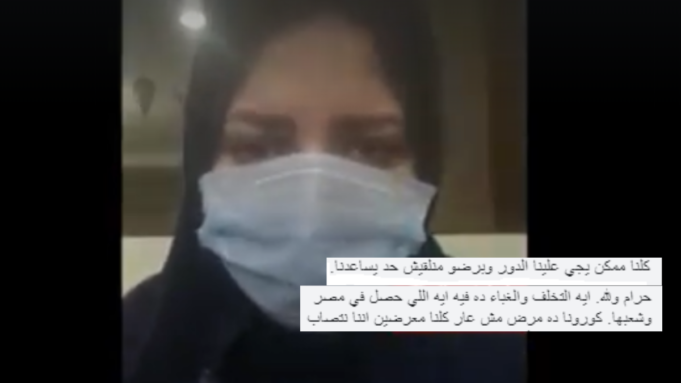 As the pandemic rages on, it’s safe to say we’ve all realized that there is nothing greater than human compassion. People are now helping others any way they can, whether by donating money and food for those who need it or offering their services for free. And it makes sense.

After all, if we don’t stick together in times like these, when will we ever do that? Here’s the thing though — some people have never heard of the word compassion and are dead set against the concept. Some people would even go so far that they’d harass a sick family.

Sounds horrible, doesn’t it? Well, that’s exactly what happened to this one woman and her family.

Only yesterday, an Egyptian Facebook page posted a video of one Egyptian woman, Noha, who took to the video to share her story. It all started approximately a week ago when Noha’s husband started showing symptoms of Coronavirus.

After the husband went to Abbaseya Hospital and got X-rays and a verdict: despite his symptoms, he did not have Corona.

But the neighbors had already seen the symptoms and they also knew the family went to the hospital, so they collectively gathered in front of their building and demanded to see the husband’s X-rays, treating the family as if they were criminals rather than potentially sick neighbors.

Things only got worse after Noha herself started showing symptoms and got a diagnosis confirming her Coronavirus at a private medical center, all while her husband’s health quickly deteriorated.

“After this,” Noha said in the video, “whenever I called the supermarket to order groceries, they’d ask me if we were the ‘Corona apartment’ and they wouldn’t deliver. The pharmacy wouldn’t deliver either.”

And the mistreatment didn’t just stop at these basic necessities, it also carried onto others. The harassing neighbors went on to cut off the family’s water and, according to the post, electricity too.

When she asked, Noha was told that it was a water motor problem that affected ‘certain’ apartments alone. “They’re treating us as if we did something wrong,” Noha said. “Like we’re supposed to be exterminated or kicked out.”

Naturally, this is nothing short of horrifying to read because, well, Coronavirus isn’t a select disease. There’s no picking and choosing here and anyone could get sick.

But wait, you may want to say, if they were sick then why are they at home? Shouldn’t they quarantine at a hospital? Allow us to tell you the answer: no.

Whether they didn’t want to quarantine at a hospital because they’re scared or because, according to hospitals, they don’t have Coronavirus, this shouldn’t be a point to think about at all.

The only point here is that one family is self-quarantining at home to avoid infecting anyone else and all of their neighbors have conspired to treat them like dirt. Like they did something wrong just because they got sick with a virus that could infect literally anyone.

Fortunately, however, the video’s made rounds and attracted some positive attention from people with the concept of being kind to others.

A lot of people commented on Noha’s video and got in touch the Facebook page’s admins to get the family’s phone number and info, so they can deliver food and medicine to them since their local supermarkets and pharmacies won’t.

Even though Noha had said in her video that all she wants is for and her family to be left alone, nothing more and nothing less, we know that she would be happy to see those good Samaritans on her side.

No, a disease is never an excuse for harassment.