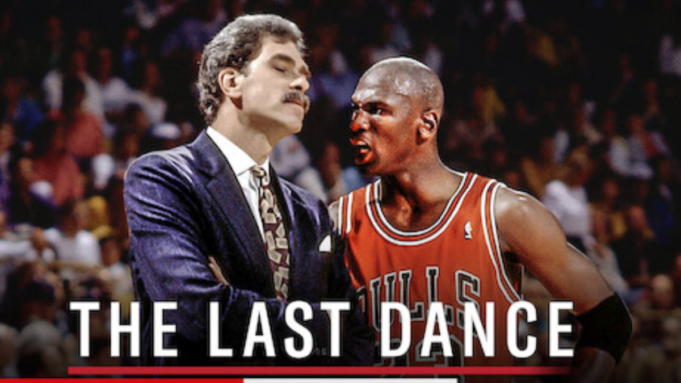 If you’re a fan of any celebrity, there’s probably a lot you don’t know. Let’s be honest, sometimes knowing all about behind-the-scenes is more interesting than the actual moment. Especially in sports, where the athletes say little and let their actions speak for themselves.

Well, you don’t have to imagine anymore. Michael Jordan’s The Last Dance, a 10-episode docuseries, did all that and more. To the point where it’s being called “the greatest documentary (sports and otherwise) of all time“. We’ll tell you all about it.

Right from the get-go, The Last Dance puts you in the middle of the troubled 97-98 season with the Chicago Bulls’ then-Dream Team, showing how the team environment was tense and caught in a tug-of-war between Manager Jerry Krause and everyone else.

The story pacing is refreshing, with us starting smack-dab in the middle of a pivotal incident or game and then going back to past events, like Jordan’s high school career and his Bulls’ rookie year, to tie everything up together.

As the docu-series goes, we feel a wide-range of emotions. Excitement, elation, anticipation, and worry — sometimes we go through this entire spectrum in one episode.

We see the highs and lows of Michael Jordan’s run with the Chicago Bulls (and a short brief of his very short baseball career) and we see his pure work ethic. We also capture the tensions present between players and management and the press and we witness high-adrenaline matches and genuine sports genius at every turn.

But, the greatest part about the documentary, is that, as Michael Jordan-focused as it was, it didn’t just stop at that.

We also got episodes revolving around Scottie Pippen and Dennis Rodman (the Suarez and Neymar to Michael Jordan’s Messi, if you will) and coach Phil Jackson, as well as deep dives into the truth behind the rumor mill, showing us a lot more than what everyone watching knew back then.

You will be intrigued and at the edge of your seat till the very end, especially with the high stakes dangling in the middle of every episode.

What It Could Have Used

So now that you know a lot about the series’s contents, you may think that it doesn’t really need anything. After all with a 97% score on Rotten Tomatoes, it’s practically perfect.

Well, here’s the thing. As a strictly-sports documentary, it is nothing short of perfect. The Last Dance covers every aspect of life off court, team training, and backs it up with old footage and interviews from everyone who had anything to do with basketball and the Chicago Bulls.

However, for a Jordan series, there is very little we see about his off-court life. In fact, we get a lot more about some teammates and the coach’s lives than the documentary’s main focus.

At one point, we see Michael Jordan’s kids in old footage but we don’t really get anything on their relationship with their dad. They don’t even show up as interviewees until the very last episode…only to say a line or two about a final basketball game.

In The Last Dance, anything we get on Michael Jordan’s life pre-fame is always related to basketball. There’s nothing that doesn’t strictly tie back to his career, making the documentary feel more like an investigative report in some instances.

Should You Watch It?

Yes. Obviously, the answer is yes. Even if you don’t know a single thing about basketball, The Last Dance will have you hooked in the first five minutes because it’s about more than just basketball.

It’s about a team, about a struggle, and about Michael Jordan — a sports icon with a massive cultural impact, who we know even if we didn’t see him play. And as we see more and more of the series, we get to know the high-pedestal sports figure a lot more.

Some documentaries just can’t be missed.