Identity Magazine
Home Lifestyle Is Tinder Still Usable in Egypt? We Went on it to Find...
Facebook
Twitter
Google+ 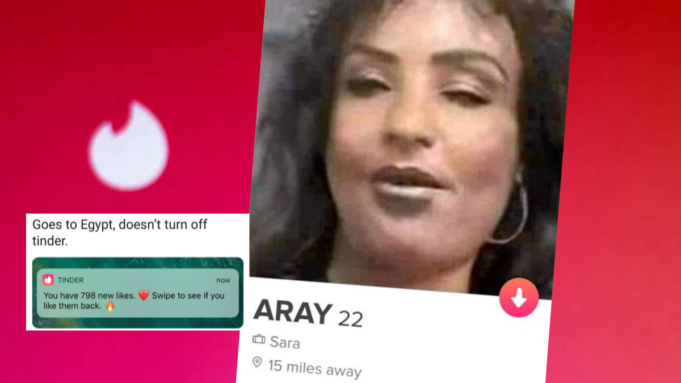 Online dating has been going on ever since the start of the internet. It’s safe to say, however, that Tinder is what somewhat normalized the concept.

Realistically, online dating is a fast and convenient way to meet people without putting as much effort as meeting in “the real world“. Online dating is especially helpful for millennials who are stuck with numerous jobs and work long hours to make ends meet. Statistics by Tinder state that, in fact, 79% of their users are millennials.

Founded in 2012, Tinder changed the online dating scene fast! The years 2014 and 2015, however, were the peak years for Tinder, with the app processing over one billion swipes per day, producing about twelve million matches per day.

The statistics, however, are all world-wide based; not specific to Egypt. While we technically don’t have official statistics about Egyptian users, by simply downloading the app and taking a short tour on it, you can tell that there are thousands, if not millions, of Egyptians using the app.

It always seemed like the Tinder world in Egypt is a mystery. Most people use it, but for years no one dares to talk about their experience, except for a very few people. And mostly those who share their experiences are for the sake of joking over a bad experience, or a cringy profile they came across.

But what really happens on Tinder in Egypt? I went on Tinder to find out!

I was never a Tinder user, but out of curiosity, I decided to use the app for one-month straight, whether I liked it or not. Other than my curiosity getting the better of me, I wanted to experience something I’ve always judged, but never experienced myself; which is online dating.

I always judged relationships formed online, and always believed they have to be superficial and only based on lust. I thought that maybe having this experience could make me less judgemental, or at least be against something I’ve tested first hand.

First thing I noticed was it’s much easier for women to use Tinder, and it’s really tough for most men.

When I was preparing for this experience, I surveyed a few friends who I knew used the app. I found out that, surprisingly, but not shockingly, Tinder for women is extremely different than Tinder for men.

There are a lot of men options, but a very small pool of women.

As a female user who is interested in men, I found that there are so many men using the app, and they are all so different.

From the expected pervs who are just looking to harass women, to those looking for hookups, to the expats who just moved to Egypt looking to make friends, to tourists who want to meet locals for a non-touristic experience, to those actually looking for relationships.

Unlike the world-wide statistic, I feel that those looking for actual realtionships are just a few.

As for the matching experience, coming from an extremely average looking person, it seemed like there was no man I swiped right on that I did not instantly match with.

There is also an option in the app that tells you how many people actually swiped right to your profile, which stated I had 99+ potential match.

To access this part of the app, you have to pay a monthly subscription, and I honestly wasn’t invested in the experience as much to pay for it, but I thought that it always says 99+ to get you to buy it.

Turned out, not everyone gets the 99+ potential matches. For men, when I saw their profiles, it had numbers as low as 3. The highest number I’ve seen on a man’s profile was 30 something.

Since I wanted to have a full experience, I purchased the subscription, in the span of the month, I reached 300+ matches, and over 10k people who swiped right on me.

Please note again, I am not an Angelina Jolie look alike, and my profile is actually boring. This shows that men here probably swipe right on all women they find, in hopes to getting any matches.

To make sure this theory was true, I asked the men using it. From real life friends, to people I matched with.

When a man matches with as little as 10 to 20 matches, and women match with 100+ men, it’s safe to say that men have to do a lot of effort to get past the matches.

Most men claimed that if they match with a woman, they have to make the first move and to keep the conversation alive, or else they get unmatched.

From my experience as a woman, however, I felt like the Tinder etiquette should be whoever matches last get to initiate the conversation.

As for the theory of matching with everyone, it was a thing most Egyptian men who are average when it comes to looks do. Good looking men are picky. Interestingly though, the good looking men claimed that they get more unmatches than the average looking ones.

As for foreign men, they are picky and get less unmatches.

Do things escalate from Tinder?

For me, I loved talking to the travels and I met several of them who just wanted to sit at a local cafe, or just know how life really is here. None of the guys I met had any intentions other than just hang out.

As for dates, this was the tricky part. Those I met with the intentions of dating were people who I somewhat knew from real life. Whether they were old co-worker or friends of friends.

Being new to the online dating scene, I did not feel comfortable meeting complete strangers. With that said, this was only my own personal experience. Those who I’ve met have met many women of the app, with many even having long relationships.

So is Tinder still useful in Egypt?

I think so. There are even several dating services that are done by Egyptians for Egyptians with so much potential.

Take Harmonica, for instance. The app was recently acquired by Match Group, which owns dating services like Tinder, OKcupid, and several other services.

The issue will remain, that women still do not feel comfortable using the apps, and they have a reason for it. Other than the regular safety, the stigma around dating apps from society will make it even harder for women to seek help if anything happens to them.