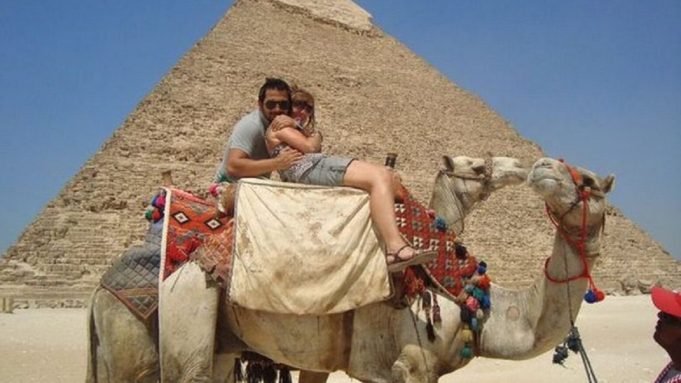 Growing up, the sight of a young Egyptian man and an older foreign lady cuddling was a common one in many of Egypt’s touristic areas. While we are not ageists and there are many couples who are actually in love, we all knew the majority are young Egyptian men looking for a way to get out of Egypt.

Funny enough, it’s 2019, and older foreign women seem to still be falling for this trap!

If you’re on any of the Dahab or Sharm El-Sheikh groups, chances are you’ll come across at least one post a month where some lady is seeking legal advice after getting ripped off by someone she married.

A recent case is making international headlines, where a British grandmother is the latest victim of marrying a younger Egyptian hunk.

Marilyn Lewis, who is now 61, married an Egyptian man, named Amr, when she was 50 years old. Amr was only 22 years old. The couple met during Marilyn’s trip to Sharm El-Sheikh where Amr was hired by her for a £15-a-day tour in 2008.

The couple married in 2009 in Cairo, and later moved to the UK. Marilyn claimed she spoiled him with gifts worth over £30,000. She even claims to have sold property so she can keep spending on his gifts.

And to no one’s surprise, he was in it for the money and the visa. Because right after they moved to the UK, the romance ended.

They officially divorced in 2014, and Marilyn is now forced to pay her former husband £40,000 in the divorce settlement.

Marilyn decided to go public with her story in hopes to gain enough media attention to change the judge’s decision with her plea. She explains that the reasons behind the judge’s decision was because she was more likely to be able to meet her own needs in the future, whereas Amr would need to “establish himself” in the UK.

In her interview with the Mirror, Marilyn shares all the red flags she witnessed during the relationship, including another woman telling her he owns thousands, yet she stayed.

While we really do sympathize with the woman, it’s still very confusing for us to understand why this is still happening.

What’s even more confusing is the fact that the law, in Egypt as well as other countries, enables this.

Granted, the law can’t forcefully tell who you should be with, but a look on the serial older women daters should be put into consideration. Furthermore, divorce laws of the world should be protecting the women, and even men in some cases, from scams.

In this case, Amr did admit to the Mirror that he did, in fact, use Mayrlin financially because “she was financially better positioned than me and willing to pay for everything.”

Yet still, the British law was on his side.

Laws aside, those working in the Egyptian tourism industry should not be hiring these opportunists. Cause if there’s anything that’s ruining tourism and the country’s reputation, it’s this.