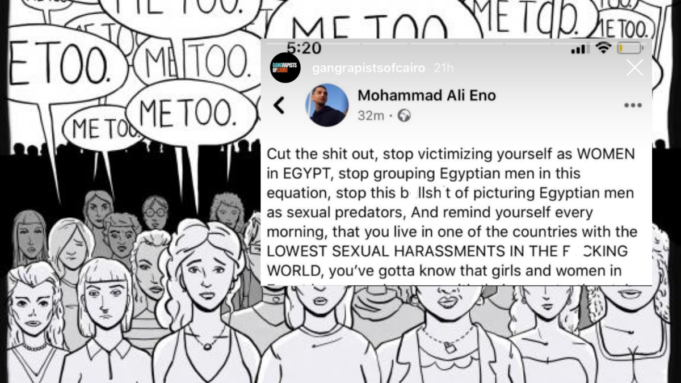 As we all know, the growing wave of the #metoo movement in Egypt has been our latest saving grace. With more and more predators and rapists being exposed, Egyptians have found more strength to report these people and their horrific crimes to the law.

But that’s not the only good thing happening. The movement also paved the way for many more crucial conversations about topics like sexualization and pedophilia, rape apologists, and not shaming victims and survivors.

The work doesn’t stop there, though. Apparently, the work doesn’t ever stop because despite all the above-mentioned conversations we’ve all been having, there are still some horrible people out there…like the one you’re about to read about.

Continuing the exposure of harassers and rapists and blackmailers, the Gang Rapists of Cairo account on Instagram has recently exposed Mohammad Ali Eno, an aspiring blackmailer and harasser with a lot of horrible views. Sadly, we’re not exaggerating.

This person is not only blackmailing a girl publically on Facebook, threatening that he’ll share certain voice notes.

According to a lot of Facebook posts, he also said that Egyptian women are actually privileged to live the lives they lead. Yes, you read it correctly.

Apparently, Egyptian women are privileged because they’re women and “feminists are whiny crybabies” who are protesting nothing, all while also calling harassment and rape “culture”.

According to him, women are apparently no longer dealing with any issues, even those regarding deeply-rooted societal harassment. Congratulations, you may now celebrate (note the sarcasm)!

Sadly, this harasser and blackmailer hasn’t stopped at that. He wants Egyptian girls and women to stop lumping all Egyptian men in the rapist category because “they’re not all like that“, despite the fact that everyone has literally discussed what saying the phrase “not all men” actually means before.

Also, he wants women to feel grateful because Egypt, notorious for high harassment rates to the point of global notice, apparently “has the world’s lowest harassment rates” and “you should be grateful“.

Needless to say, all of this is simply nothing short of horrendous. We don’t even have to say all this person said is untrue because we all know it’s not true.

The thing is, these Facebook tirades of his (where he also says women are hypocrites for not being perfect angels) are also harmful. Think about it.

If one person, just the one, sees these posts and somehow finds some sense in these words, they’ll ingrain them as facts. And then they’ll go on to make life unbearable for women, even if they don’t out-rightly harass and/or blackmail them.

They will also spread this viewpoint like wildfire, until it clouds a lot of people’s visions which is scarily easy to do in a society with sexism as its default setting.

And we haven’t even mentioned the saddest part. Eno’s point of view where basically harassment statistics “have never been lower” and that culture doesn’t change and “we should all deal with it” isn’t even strange for Egypt and we all know it.

If it were, things would have been much easier. Sadly, this is the point of view of the majority and basically the whole reason the recent Egyptian anti-harassment, anti-rape movement picked up. And the reason why it can never stop and why we need to work harder, especially now.

What we need to do here is exactly what Gang Rapists of Cairo and many others accounts are doing online. We need to expose the dangerous people supporting and spreading these outlooks and we need to make sure others understand that they’re not acceptable.

Mentalities like these are simply unacceptable. Not now, not ever.