Identity Magazine
Home Lifestyle It’s Not As Funny As It Sounds: The Struggles of Being an...
Facebook
Twitter
Google+ 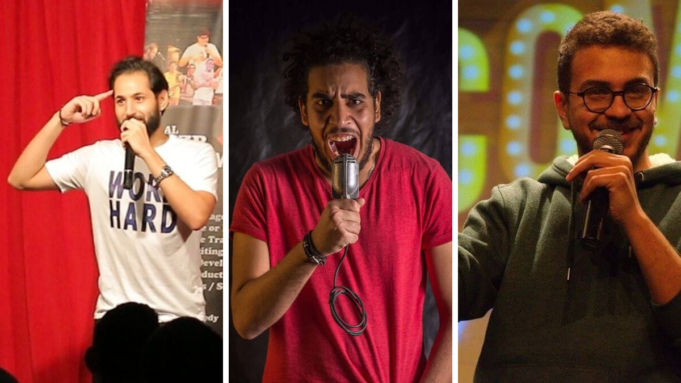 The story goes that if you have a talent, you should embrace it and you should find a way of making your dreams come true. There’s a little more between these two points that they never tell you. Especially when it’s about stand-up comedy.

Stand-up comedy is a field that’s unique and largely unexplored and we have it in our minds to fix that. So, we asked these three stand-up comics about their craft.

Discovering The Gift of Comedy

The first thing a person does before embarking on growing a talent is, naturally, to discover it. This goes to all fields in life and stand-up isn’t any different.

“Usually, you discover your talent because you’re the funny friend, always making others laugh,” Hashem El-Garhy tells us. “That’s part of the reason why I went to the Axis of Evil show when they came to Cairo in 2007 –I thought I could make anyone, regardless of where they came from laugh.“

Laughing at his misery, he continued. “No one laughed, though, so that was horrible, but I wasn’t discouraged.“

On his own experience and starting out, Kintaki’s story might not be the same as everyone else’s. See, he got his start at a student protest in the MSA.

“We made a comedic video to get our demands as students heard,” Kintaki says. “I wasn’t really thinking about it, but the video did well and people started talking. I already followed stand-up comedy, but that was when I said ‘why not’?“

Ahmed Essam, our third comic, acknowledged the cliches behind making your friends and family laugh and said that for him, it’s only half true.

“It was making my dad laugh on purpose that gave me the comedic confidence,” Essam said. “He’s a play director who’s notorious for being hard to laugh as he already worked with comedy giants.”

If You Have An Unconventional Talent, You Already Know What Happens Next

If you or anyone you know is really good at making art or singing or writing–hell, even jazz dancing–there’s a bit you know and dread.

“It’s always the same with everyone,” Garhy answers. “I always get told by friends to try this joke or that one. It doesn’t work like that, you know! I’m not an engineer, so I’m not allowed to give engineering advice. You have to do your own work.“

“What I hear is typical really,” Kintaki says. “‘Oh, you do stand-up? Let’s hear a joke’ — somehow people think you can just perform anywhere about anything.”

Essam finds this question amusing. “I could make a book out of these!“

He went on to explain that what gets him down the most is that people either don’t get it or have a false concept that’s just lame.

“It really goes back to when stand-up was being hyped on TV,” Essam said. “Once the people come and see our shows, though, they realize what they’re missing.“

Comedy Is A Misunderstood Profession

“People just don’t understand the work that goes into it,” Garhy says. “It’s takes time and a lot of effort; it’s no joke.“

Kintaki gives another perspective. “People either think we just get on stage and tell jokes or that there’s someone who’s writing your material. Some even think you just get up one day to write and perform the next when you could actually work 6 months in advance on a 10-minute set.“

To our third comic, things are more or less the same.

“People don’t get that it’s a form or art,” Essam says. “It requires more than just being funny. Your posture on stage, movements, enunciation, acting–everything is vital for your craft.“

He adds that stand-up isn’t just getting on stage and saying funny stories. It’s writing and pouring your heart, pains and points of view included.

What Do You Wish You’d Known As An Aspiring Comic?

“I’d tell younger Hashem to toughen up and to not take it as un-seriously as he did just because it’s comedy,” Garhy says. “I wish I’d known to not let anything get me down quickly and that with time, I’d have more control of the crowd.“

“I mean, I already make fun of my style whenever I see old videos,” Kintaki says. “It’s a necessary stage to go through, part of the growth.“

Adding on, he said. “I’d advise others to know that there’s no such thing as ‘no’ in comedy because I didn’t know that. Oh and to take notes — I actually changed to a better phone just so I could be able to take notes every time inspiration hit. Writing can also grow your storytelling and one-liner methods.“

Essam adds on to the words of his two colleagues with two pieces of wisdom.

“Don’t go the easy way,” he says. “Easy jokes can get the biggest reactions but they’re worst because they’ll end your creativity quicker.“

Being smart, Essam argues, is through broadening your horizons and engaging your imagination in coming up with punchlines and metaphors.

“My second advice is to talk about what bothers you,” he adds. “And about your flaws, your pains. Don’t be generic or a crowd-pleaser.”

The Turning Point of The Comic’s Career

Naturally, not all comedians reach the point where they hit their milestones at the same time. Everyone’s achievements differ, as they do for the comedians we interviewed.

“I think it’s when CNN covered El-Hezb El-Comedy,” Garhy, the founder, says. “That was a good year for my career. Another point is when we did the Edinburgh Fringe Festival then the Montreux International Comedy Festival in Switzerland.“

He adds that afterwards, Comedy Central approached them and that that very same year his mother had passed, so he learned the hard way that life was a series of highs and lows.

For Kintaki, the turning point came in waves of experience that added to his arsenal of weapons, the confidence every comedian should possess.

“I think I learned that the best when I hosted TedX in Ras El-Bar,” he says. “I got on stage 8 times, each time doing a 10 minute segment, so I was very visible and interactive with the same crowd.”

Essam doesn’t think his career’s turning point has happened yet.

“I had a small turning point on that Comedy Central episode I did on Facebook about mental health,” he said. “I never realized how many people feel the same way I’d felt about this.“

Telling A Tough Crowd From A Good One

A comedian’s greatest nightmare is getting up on stage and talking to hear no laughter. Other than the awkwardness involved, a lack of laughter can mean you’re dealing with a tough crowd to crack.

Our comedians shared their thoughts on these instances.

“Tough crowds, in my opinion“, Garhy says. “Are affected by outside factors. Sometimes, it’d be summer and the venue has no air conditioning. That’s enough to turn anyone off!”

On dealing with crowds in perfectly aired venues, though, the comedian gives us a piece of advice.

“I think it helps when you don’t take too long to get to the first joke“, he says. “The crowd will tense up or get bored if you do. I find that I can usually turn the crowd back on my side but crowd-control isn’t everyone’s gift.“

Kintaki agrees. “Have the first laugh out by the fifteenth second or they’ll get bored and they will very much show you that.“

“Every comedian has that one joke in the beginning that he uses to test the audience“, Essam adds his two-cents. “So, that’s how you know if you’re going to have a good time or if it’s going to be the longest 15 minutes of your life.“

Comedy, in the end, is kind of serious.