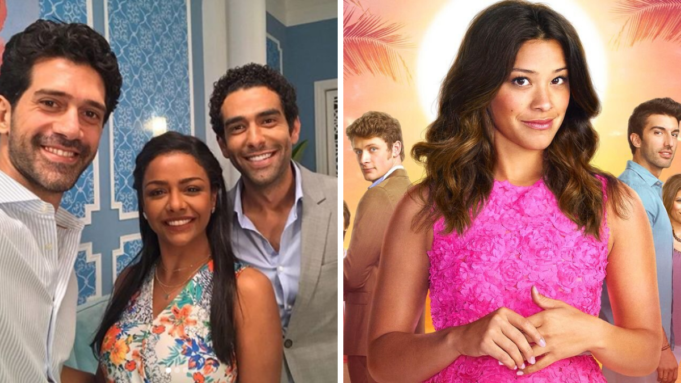 We sure have seen a lot of Egyptian TV show adaptations in our time, if you think about it. So far, we’ve had adaptations of Ugly Betty, Breaking Bad, Grand Hotel, and ER but the list is not going to stop there because we’re also having a Jane the Virgin adaptation soon!

Before you get defensive and start condemning the “lack of creativity” and all, give us a minute of your time. See, Jane the Virgin adaptation “El-Anesa Farah” is actually great and we’ll tell you why.

El-Anesa Farah has the potential it has because, unlike a considerable bunch from the shows we just referenced, it’s based on a Latino-oriented American show which is in itself based on a Venezuelan telenovela.

When it comes to adaptations, story-lines are always interesting and exciting and tell us stories we might have never thought of otherwise. El-Anesa Farah’s premise is enough evidence.

Can you imagine how a story about artificial pregnancy and single motherhood is going to be handled in this adaptation? We can’t but we’re dying to see how that’s going to go.

It’ll be giving the fresh faces a chance and known faces a refresh.

From the look of things, it seems like El-Anesa Farah is set on giving rising actors the breaks they deserve as well as giving exciting chances for established actresses like Rania Youssef.

And we cannot forget that we’ve all been rooting for Asmaa Abulyazeid ever since she’s come onto the scene and now she’s finally getting the bigger and better roles we know she’ll excel in.

You have to admit it, the Egyptian take on things is actually pretty entertaining.

When Heba Regl El-Ghorab started airing, a good chunk of the population were glued to their TV sets and with good reason. Ugly Betty was great, but its adaptation was perfect (at least for the first season) because it had this natural Egyptian charm about it.

Sure, the Egyptian take on things can go awry, like last Ramadan’s Weld El-Ghalaba, but more often than not we get gems that stay with us for quite some time.

Sometimes, it IS all rainbows and butterflies.