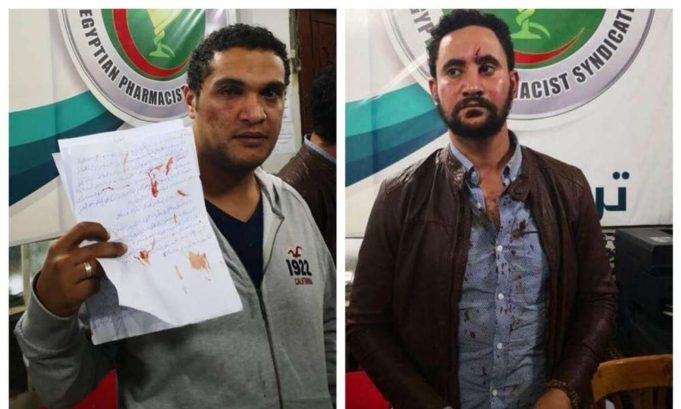 Several journalists publicly expressed their anger and resentment towards the assault on their fellow journalists that took place at the Pharmacists’ Syndicate during a press conference covering the submissions for the syndicate’s presidential elections.

The president of the Pharmacists’ Syndicate, Mohey Abeid, ordered his bodyguards to assault the journalists attending the press release. So far, it has been confirmed that 4 journalists have been injured. However, according to other claims, more than 15 journalists were detained during the attack by the security personnel.

The president of the Journalists’ Syndicate, Abdulmohsen Salam, officially stated that he will pursue the matter legally and that the syndicate will press charges against the assailants, as well as the board of the Pharmacists’ Syndicate.

Salam also added that the unlawful assault led to severe injuries among a number of the attending journalists, including Al-Watan’s editor, Esraa Talaat.

In an ironic twist, a candidate for the position of Pharmacists’ Syndicate presidency, Karam Kordi, agreed and stated that the assault was unlawful and described it as “criminal.”

“You would feel that this isn’t a respectful syndicate anymore; it felt like a madhouse with all the iron doors and bodyguards around,” Kordi added.

Journalists are using their platforms to express their anger concerning the assault, calling it “criminal” and demanding that the board of the Pharmacists to be sent to court.

The accusations point to the president, Mohey Abeid; the syndicate’s manager, Fayez Shatta; and a member of the syndicate’s council, Rania Saqr as them being the prime suspects.

The assaulted journalists already reported the incident and filed an official police report, under number 16061 in Qasr EL-Nile police station.

We may not know the full the story, but we do know for sure that there is no valid reason to physically assault journalists who are only doing their job.

Simply put, authorities should proceed with legal actions to ensure that the victims of this assault get reprimanded accordingly.