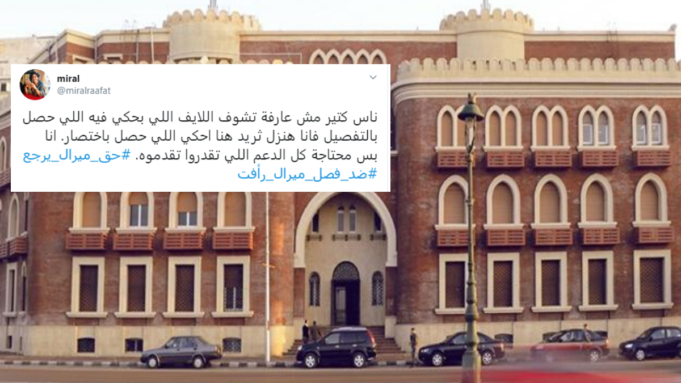 Recently, Alexandria University student Miral Raafat was expelled from her university and while that is a sad thing to read, the story of what actually happened is rather horrifying.

See, what happened was that Miral went to college to take an exam shortly after undergoing surgery. During the exam, the supervisors were being a little loud, which according to Miral, was disturbing the exam process, so she told them to keep it down.

What happened next, according to Miral’s twitter thread detailing the incident, was horrific.

The supervisors didn’t comply and, not only that, a professor came into the exam hall to take away Miral’s test without really getting to the root of the problem.

Miral followed the professor, who allegedly talked to her rather rudely, and took a video as a proof that the incident happened only to have her phone kicked out of her hand and then be manhandled herself.

Then, because this nightmare gets worse, the professor locked the student inside the Head of the Department’s office, where the abuse got worse and crossed into alleged harassment.

You’d think this is as bad as this terrifying story gets, but we haven’t yet mentioned the straw that broke the camel’s back. After this alleged mistreatment and a few ‘investigations’, the university expelled Miral.

We know that, while absolutely vile, Miral’s story isn’t the first of its kind. We’ve even written about many similar incidents that happened and are fully aware are still happening now.

Quite frankly, it’s disgusting. There’s no getting around it. We called for change in the way colleges are run and how professors treat students so many times our throats are getting chafed.

As the years go on, though, the only thing that changed is that we’re getting more fed up.

The incidents pile up and an endless amount of students get treated like dirt, whether through insulting language or harassment or physical harm.

This only leads to an environment in which not one student can stand the thought of school/university, all because things as simple as mistreatment and humiliation aren’t taken seriously.

What we need to do here is break this cycle ourselves. We cannot keep seeing incidents like these and just talk about how much of a shame that they happened.

We need to take action by reporting incidents where students are mistreated or professors are shady, even if that appears to be none of our business. Even the smallest actions will aid change.