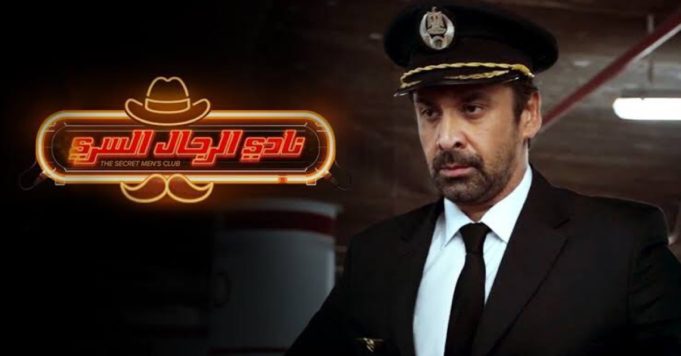 After his cinematic disappearance following the movie that rose many eyebrows “El-Fil El-Azrak”; Kareem Abd El-Aziz is back with a new one!

To be more accurate, the story tackles how all Egyptian men are in fact cheaters but in a very humorous way. How?

The movie revolves around a married man who supposedly loves his wife and always shows her how loyal, kind and undemanding he really is. Always doing whatever she asks and drawing the perfect picture for a perfect husband.

With that being said, that’s not who he really is at the end, obviously! He actually goes the extra mile not just to cheat on his own wife, but to make it easy for other men to cheat too like it’s a national mission.

He creates a secret club for men where they ironically do not talk about cheating and don’t even like to bring the word up. Seriously?

However, they have a man who’s like their savior. Always watching over them to make sure they don’t get caught. What’s really hilarious about this is that he doesn’t just make sure their wives don’t catch them; he also focuses on not letting their zillion side chicks whom they hook up with using different names and Facebook accounts know who they really are or that they are married.

The thing about this movie that as much as it’s very humorous; it’s also too real, in a bad way. It shows us the evolution of f*uckboys in Egypt, especially when they’re actually married men, not even teenage boys.

Yes the whole idea of the secret club that is originally inspired from Fight Club, is definitely fictional. But it’s a direct reference to how men could literally go out of their way just so they could cheat.

And speaking from experience, Egyptian men these days do not just cheat in hopes of not getting caught, they actually sometimes create alternative realities for their partners AND the ones they’re cheating with; as if they’re living a double life. Trying to have the best of both worlds!

What is the best of both world in this case, may you ask?

It’s the perfect set up life of having a loving wife, a warm home to go to at night and a bunch of kids (who keep the wife busy, of course). And at the same time, living the life of the playboy who has a main side chick and multiple others just to hook up with.

It’s like they find excitement in keeping both lives secret and having it all; instead of just settling for either one, the loving husband or the single playboy.

Again, as much as the movie is merely taking the comedy side more than anything; the ending actually is a thin line between being unrealistic and well, unfortunately real.

In the end, after everything goes down and the wife as well as the ‘Main Side Chick’ find out the painful truth, they do break up, but they just separate for a bit and then she simply goes back to him when her anger subsides. HORRIBLE, BUT TRUE!

Why? Because unfortunately, in many cases, we witness that the wives who get cheated on, get back with their husbands after they apologize and show how sorry they are; but also mainly, for the kids. Always.

However, that is not the only unfair thing that occurs in the movie and in real life. What’s also unfair is that after the husband/f*ckboy apologized and supposedly realized he was mistaken, HE GOES BACK TO BEING WHO HE REALLY IS; A CHEATER!

And honestly this isn’t something that would be tackled in a movie if it did not happen in real life, because it does. BIG TIME.

At this point, we don’t know whose fault it is, the cheater or the forgiving wife? Maybe both. But what really isn’t the wife’s fault is WHY he cheated!

During the confrontation between Kareem Abd al-Aziz’s character and his wife, she actually blamed herself a bit and he agreed; which is really problematic and which again, happens in real life.

A wife caring for their children and getting caught up in family life, home management, school homework and sports practices does not, by any means, give a man the green card to go about his way and CHEAT, blaming it on her. Even partly.

You want to cheat? Then do that, but why not just leave the person you thought you loved to go about her separate way, and you go about yours too!

The movie did a good job referencing the unfortunate circumstances of real life; it’s definitely worth the watch. The actors excelled in portraying the characters too.

What do you guys think? Whose fault is it? And how did you see the movie, in general? Share your thoughts!