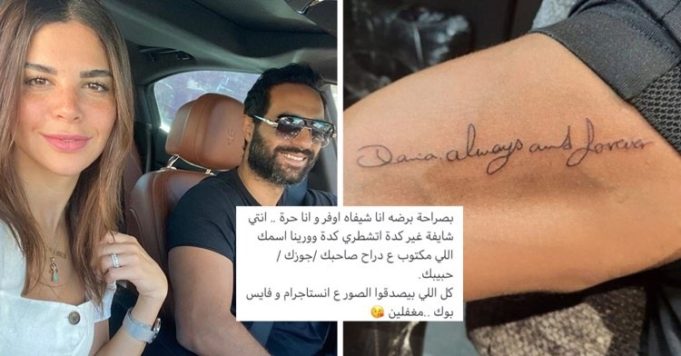 While some found the post endearing and all in all a cute gesture, others went on to bash both Karim Fahmy and his wife for the whole thing. From serious name-calling to offensive accusations of being “too insecure”.

The thing that made us wonder why most people feel the need to shame any man or couples, generally, for displaying public affection (PDA).

Naturally, the hate comments came flooding under his Instagram post and shortly after it spiralled throughout all social media platforms like Facebook and Twitter. Between Haram shaming him and calling the couple “shallow” and having nothing better to do; here are some examples of the hate they got.

Another random Twitter comment (that’s now deleted) went on to analyze the controlling-psychology behind the wife’s behaviour, which according to that one girl on Twitter, claims that Karim was coerced by his wife to do the tattoo! But here’s another one that resonates the original tweet.

Seriously, we feel like our society is a fertile ground for major paradoxes. On one hand, we’re always complaining and asking men to be more expressive of their emotions towards women, and here we are shaming this one man who decides to do so.

So this is not really just about Karim Fahmy and his tattoo fiasco. We can sense a bigger problem here and someone had to say something. Despite us living in 2020, we still spread the same negativity towards notions like love, gender and emotions.

The simple act of showing love and affection is not shameful and no one should be embarrassed to do it. A man openly expressing his love for his partner shouldn’t be translated into personality weakness.

Consented love and affection, especially coming from men, should be accepted if not even celebrated. So, here’s something to think about before leaving a sarcastic or hurtful comment somewhere!