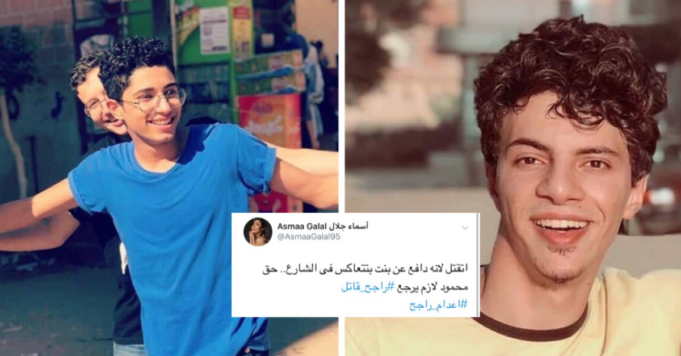 On Wednesday, October 9th, in a heroic act, 18-year-old Mahmoud El-Banna stood up for a girl who was sexually harassed in Monofeya. And ended up killed by the harasser and now murderer Mohamed Rageh, 18.

As much as this pains us just like everyone else – El-Banna’s brutal murder and the fire it ignited won’t just go away with Rageh’s punishment.

It’s not about how Rageh is a murderer who deserves to be punished by the law. Nor is it only about standing up for sexual harassment and facing the consequences; whether you’re a man or a woman.

In fact, it’s a living proof that El-Banna’s story exists everywhere in Egypt. What happened was an example, a tiny example actually – in comparison to what we’re living in, to what we face on a daily basis.

And because the story spread on social media, it was able to reach all of us as well as get the media’s attention.

But isn’t the social media standing up for El-Banna right now the same one that is still used as a tool to question whether or not sexual harassment is the guy’s fault?

Earlier, as part of the “Say Your Opinion” or the “Sco Pa tu manaa” thread that took over Egyptian Twitter, people opened up a discussion on whether or not sexual harassment was the girl’s fault.

As expected, the horrible comments that usually imply that girls ask for it came raining. Like, what else can we expect, for real?

The people who still think it’s okay for sexual harassment to be up for debate are the same ones who are now shocked at how an 18-year-old sexual harasser murdered someone who stood up against him for a girl.

Again, we heard about El-Banna’s story because it was able to reach us through the internet and through the movement that was started against Rageh.

But what about the stories we don’t hear about? What about the young men who get killed every day by reckless criminals who think the world is theirs and that their parents’ money could get them anywhere and out of anything?

According to all the witnesses in this case, the people in the area where El-Banna lived were very much aware of how dangerous Rageh and his friends were. But still, nobody had the nerve or courage to do anything!

What about women who get sexually harassed on a daily basis and are afraid to speak up in fear of getting shamed and blamed, also because they know nothing is going to happen?

What about the poor mothers who lose their children to bullying and violence and rarely ever see an action taken?

We’re not only calling for action in El-Banna and Rageh the murderer’s case, we’re calling for everyone to wake up and look around. We’re calling for parents to raise their children to stand up to what’s right and never fear anything as long as they’re on the right track.

We’re calling for everyone to stand up against bullying, violence, sexual harassment, and everything that we’re unfortunately getting used to, instead of standing up against, in this society.

For those who don’t know the full story, here’s what happened:

According to MBC Masr – who got in contact with El-Banna’s family and friends -, on a normal day in Monofeya, Rageh, who’s known to be a bully in their area, along with two of his friends, murdered El-Banna in cold blood.

Rageh and his criminal friends were sexually harassing a girl on the street. El-Banna, the hero of the story, not only stood up to Rageh and his friends but also told them to “consider the girl they’re harassing a sister“.

Unconfirmed sources even said that Rageh was not just sexually harassing the girl, he was actually hitting her.

According to El-Banna’s friends, he even took to Instagram to simply write, not about the incident itself, but about how harassment should stop in general. And that whoever does that is no man.

That’s when Rageh saw the post/story and threatened El-Banna that he’s going to kill him as soon as he lays eyes on him next. And El-Banna simply replied that he shouldn’t take the words on himself.

But it wasn’t long until the three criminals came up with a plan to actually murder El-Banna. As they waited for him to finish his private lesson and went after him.

While one trapped him and the other hit him with a stick, Rageh stabbed El-Banna in his neck. And according to his father, the poor 18-year-old kept running away in fear only to be trapped again and stabbed in the stomach that he reached the hospital half dead, already.

And now, almost all of Egypt is calling for action, an immediate one.

On another note, other unconfirmed sources are saying that Rageh’s parents have been trying to bribe El-Banna’s parents and give them a million pounds to drop the case. That’s in addition to how they’re trying to shift the accusation from their son to one of the other two.

Since Rageh was the one who stabbed El-Banna.

Rageh’s parents being filthy rich and letting their son do whatever he wants, was something El-Banna’s father highlighted to MBC Masr.

All we know now is that all three murderers were arrested shortly after what happened.

Examples of Rageh should face the consequences of their horrible actions so that people, especially young ones, understand that there’s nothing wrong with being a good person.

And that being a bully and a criminal has its consequences and shouldn’t be the norm anymore.

We could only hope for people to start taking stands against what matters. We hope that murderers, criminals and sexual harassers finally face the consequences of their horrendous crimes.