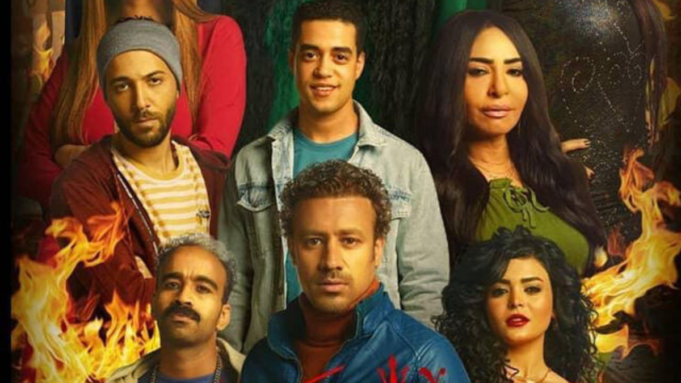 Egyptian entertainment has been shifting to a newer direction for a while now. A direction that veers into the dark and edgy and mysterious without betraying the stories they choose to tell.

Sure, we were skeptical when this direction started because, sadly, we proved that just because it’s new, doesn’t mean it’s watchable.

Here’s the thing, though. Following the ongoing success that Fi Kol Esboo3 Youm Gom3a created, we decided to re-immerse ourselves into newer Egyptian TV shows coming out, like Mamlaket Iblees.

We have to admit that when we discovered Mohamed Amin Rady (El-Saba3 Wasaya, Neran Sadeqa, El-Ahd) wrote Mamlaket Iblees, we were intrigued. See, most of his work features dynamic generational struggles and a wide cast of interesting characters.

In this story, we see a vibrant neighborhood under the iron fist of Fathy Iblees (Sabry Fawaz) and his God-Complex. Then, we happen to see that this Iblees is not all he pretends to be.

We also see that among the people of the neighborhood is a cast of people, all with ulterior motives, dark pasts, and a horde of secrets that should remain hidden.

Then, of course, we see the natural order of this neighborhood come crashing down and turn into a burgeoning pot of chaos and confusion because of the interestingly-timed murder of a feared man.

And this is all episode one, mind you! The journey gets much darker afterwards. Though, frankly speaking, you wouldn’t notice it because Rady’s use of magical realism here makes the outrageous seem mundane.

To say that you can easily pick out the most interesting character in this show would be a bold-faced lie. As we’d mentioned before, we meet a lot of odd and loud personalities here.

Other than the titular Iblees, we have Azhar (Ghada Adel) as his wife who also knows her way around a knife and Kaseya (Salwa Khattab) as a reformed-but-not-really criminal. We also have Ghoraiba (Asmaa Galal) as Kaseya’s rebellious niece and Dalida (Eman El-Assy) as a woman who vowed not to speak to any man for 3 years.

We’d assumed we’d see the show through the eyes of neighborhood-outsider, Posh Body (Khaled Anwar), but that’s not the case. We get enough time with most characters and we get a sense of who they are (or were) that leaves us wanting to know more.

So far, all characters are adequately played and interesting and not one performance seems contrived. Even if we’re still on the fence about Eman El-Assy.

It’s not too hopeful to say that if the future of entertainment looks like this, we’re all in. Mamlaket Iblees managed to successfully integrate the horrifying, disturbing, and comedic all in one-go with a load of what only seems magical.

The plot, so far, has no holes and nothing seems amiss, which makes for a good first season. The characters aren’t tedious — if anything, all characters (whether main or supporting) have important parts to play and important arcs to be discovered.

Granted, we’re only three-fourths of the way through with this show but so far it’s going great and we absolutely recommend it as an enjoyable story that will suck you right in. If not, we’re sure the corpse being dragged around in episode one will!