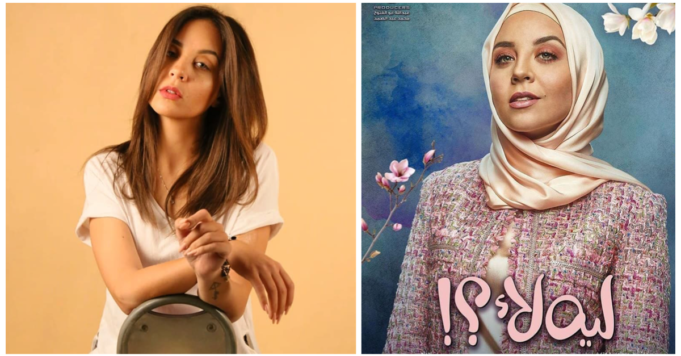 We had the privilege to exclusively talk to one of our personal favorite actresses; the beautiful Mariam El-Khosht! In a relatively short time on the scene, Mariam had already stolen so many hearts, not only for her great talent but mostly for who she is.

The audience was officially introduced to Mariam as an actress in “La Totf’e El-Shams” (2017), and every role she did ever since was always quite remarkable, different and unique. From”Layali Eugenie” to “El-Anesa Farah“, “Le3bet El-Nesyan“, and the trending hit series “Leh La2?‘; Mariam has been shinning!

Like so many others, we too were and still are in awe of her performance and portrayal of Radwa in Amina Khalil’s “Leh La2?“. And we’re honestly glad we had the chance to talk to her about it, as well as her recent roles, upcoming projects, and most importantly, her passions in life.

1- The idea behind “Leh La2?” focuses on independence and kind of promotes feminism, but in the right manner. And that concept is much needed in our society during the present times. What do you think about that?

It’s definitely much needed! And even though the idea behind the series is pretty obvious from the very beginning, still, in my opinion, the way the message is presented lets you know that the creators of the show are not looking to spark controversy or trend on social media. It’s very clear that they believe in the idea itself and are very passionate about telling the story. Personally, that’s what I liked most about this project!

Also, when you think about it, the people behind the show are all women; since it’s written by Marian Naoum, directed by Mariam Abo Ouf and starring Amina Khalil who is a very strong woman herself – it’s honestly great! And as much as it’s promoting feminism, it’s also not trying to tell you “Hey, that’s what girls should be doing nowadays” or else. That’s not the purpose. On the contrary, each example presented on the show has its own weaknesses and poor decision making; it’s not always rainbows at the other end of the spectrum.

2- Radwa in “Leh La2?” is a character you’ve never done before; how was it like preparing for such a role? Also, talk to us about the master scene that has become the talk of the town during these last hours!

Honestly, I get a bit confused when people ask me about Radwa as if she doesn’t usually exist in our society. The truth is, my portrayal of Radwa was derived from the existence of those kinds of women in real-life. I’m pretty sure that each one of us knows at least one or two Radwa’s from her inner circle, who’s engaged to someone who treats her awful and is always feeling helpless, or worse, not even seeing the problem that clearly shows itself on a daily basis. Actually, I think a lot of us may have even been at that stage in a relationship before.

The reason why a lot of people wouldn’t even try to raise a red flag at her behavior as well as what goes on in her life is that they have gotten used to the “normal” presence of that example as if it’s not dramatic enough to talk about. And the way I see it, it’s mainly because when we witness cases like Radwa’s, all that’s usually said is “It’s fine, all men are like that”. Well, there’s no such thing as “All men or all women are like that”. It doesn’t make sense.

As for the interactions with the series, I’m really happy people are watching and talking about it. And to be honest, I’ve prepared myself that there were going to be a lot of controversial and negative comments. But in my opinion, those who will take the message of the show the wrong way or will decide to judge it from a couple of episodes are the ones who need to continue watching the most, in order to accurately understand what we’re trying to convey.

3- “El-Anesa Farah” was very successful, and your character as Alia was pretty unique and even a bit insane in the most fun way. Are we going to see a character development for her in the upcoming seasons? Apart from that, the chemistry between the cast was very evident on screen, take us behind the scenes of that special series!

Alia’s character is so different and completely unpredictable and that’s what I love about her! With her, you just never know what’s coming. Actually, before “El-Anesa Farah“, I’ve watched “Jane the Virgin” and I’ve always been so fond of Louisa [Alia on the Arabic version], and I was so excited as soon as I heard about the Egyptian remake and the fact that I got to play Alia!

As for behind the scenes, “El-Anesa Farah“, in all honesty, was so fun! Everybody on set was really fun and humorous, in addition to the fact that Asmaa Abolyazid and I have always been friends. And speaking of humor, Ahmed Magdy was crazy on set, there were times when I couldn’t finish my scenes because of his spontaneous and funny actions. He’s always dancing and running around on set. I really enjoyed “El-Anesa Farah” and I’m so looking forward to start filming season two!

4- Although Zeina in “Le3bet El-Nesyan” was not a big role – considering that you originally guest-starred in the Ramadan 2020 series, however, your character’s appearance still changed the entire plotline and took the events to a whole other more intriguing direction! Tell us what you think about that and how did you prepare for the forced-abortion scene?

Yes, that’s true and I’m so thankful for such a strong appearance!

The abortion scene is hands down one of the hardest scenes I’ve ever had to do. It’s honestly such a heavy scene and a terrible situation for any woman to be in. Usually, in acting, when you portray a character, you either have a similar experience, know someone with a similar experience, or you simply just practice really hard till you accurately perform what’s needed.

Resorting to the last option, of course, I had to ask all my actor friends whom I trust for tips on how to shoot such a difficult scene. I was very nervous and even terrified for three days straight, till Aly Kassem, while on location, simply sent me the picture of the hospital room with the abortion bed, it shocked me to the point that it actually helped me do it. I needed this.

5- So far, all your focus has been centered around drama and television, when are we going to see you on the big screen?

All I can say about this is that the opportunity just hasn’t presented itself yet. I would really love to work in film, but for some reason, every time I’m a bit closer to actually doing it, something out of my hands occurs, like a clashing schedule or halting production. And I’m honestly a big believer that by the time it finally happens, it’s going to be the right one to start with!

6- How do you deal with social media; especially the bad side of it, where hate comments are all around?

I like being around, I like posting stories, not too personal, but I like the idea of being close and relatable to people. Social media for me is about the balance between not sharing too much, but not being one of those celebrities who seem so far away from people. However, the only personal things I could keep sharing on social media are my passions; for animals, for example, or makeup…etc. Because those passions are real.

Thankfully, my social media experience when it comes to hate-comments or bullying is not that wide nor repetitive. That being said, I reached a certain conclusion about the matter that honestly brings me peace; as long as you’re satisfied with your own actions and life choices, no one can make you feel bad about yourself.

And I’ve also realized that I’m only hurt by hate-comments when it hits home for me or when the comment is pointing out something I’m insecure of. So I try to only share and post things I’m completely satisfied with.

When it comes to constructive criticism, I don’t mind at all. I actually appreciate that. Because in the end, we’re entertainers, we basically create content for the audience to see, therefore; their opinion is important. As for those who only write harmful comments for the sake of it, well, it’s only common sense that you’re not the problem here.

7- We know you’re very passionate about cruelty-free, animal rights, and veganism as you always use your platform to spread awareness and share your passion about such crucial matters. When did it all start and what do you think of the backlash that often accompanies those topics?

The passion started because I’ve had animals all my life, they’ve always been part of my family, not just owned pets.

People usually don’t like to be faced with their wrongdoings nor hear about things they need to change about their harmful behavior. Most of the backlash surely derives from here, because I honestly think that those who attack causes like animal rights or cruelty-free are the ones committing such actions, but never want to admit it’s a problem so they don’t have to work on the solution.

We can’t express how glad we are to have talked to Mariam and we can’t thank her enough for the fruitful and fun conversation. Stay tuned for the second part of our interview with Mariam El-Khosht, where we actually get to know her on a more personal level with a set of quick and fun questions!