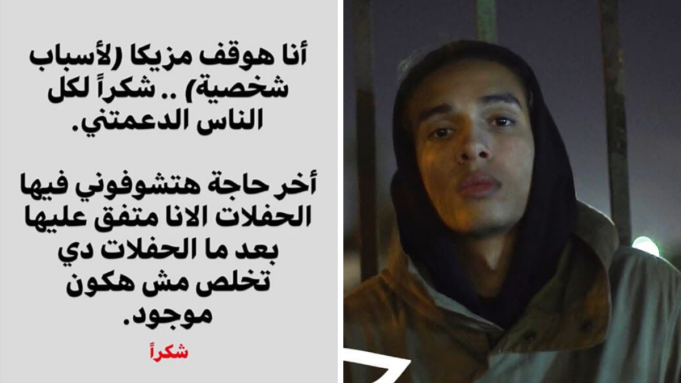 Love him or hate him, Marwan Pablo has managed to make a name for himself in Egyptian trap music. The fact that the genre has just skyrocketed into the mainstream is a greater part of that success. Here’s the thing, though — all of these victories will apparently stop soon.

Whether you’re feeling the loss or celebrating, though, you have to be wondering why. Why would a twenty-something year-old virtually on top of the world give everything up all of a sudden?

Well, a quick dive into most headlines written about Pablo might give you some insight. So far general consensus is Marwan is dealing with the psychological aftermath of the endless online hate disguised as critique.

We’ve written at length about the public’s vitriol for Pablo. How, despite how hard it tries to mask itself, it will never be considered constructive criticism — simply because its intent isn’t to help, its intent is to hurt.

In fact, we think that this deep-seated loathing may have sped up Pablo’s retirement, if not manifested it.

However, we do think there are different theories as to why Marwan Pablo suddenly retired.

For one thing, the pressure to outdo his own music and outsell his records might have gotten to him, which would be an honestly understandable hypothesis in this age of crippling self-doubt.

Another theory here is that Pablo did retire…only he retired the Marwan Pablo character, just like he retired his old stage persona Dama.

Others, though, think he’ll be back sooner than we think, with the same old personality, and that this was just a foolproof marketing method to generate support and capture audience attention.

Considering the amount of rappers/musicians who slowly leaked tracks and staged some sick comebacks (hello, Nicki Minaj) after their retirements, this wouldn’t be too out of touch.