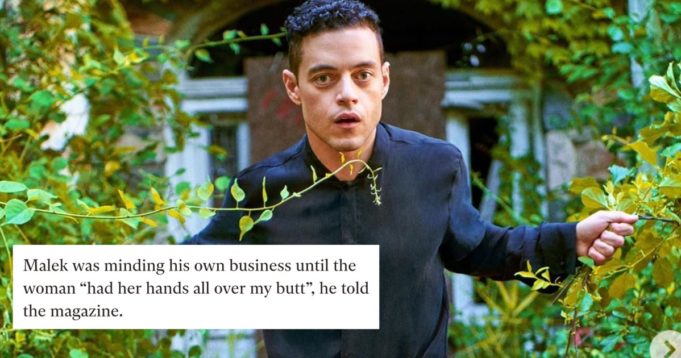 Recently, there has been a trend to make fun of sexual harassment. Well, not recently, it’s always been around. The thing is, we always knew it was wrong, though. So, why isn’t so wrong when the ones harassed aren’t women?

You might think this is a stretch because, well, it’s harassment. No one makes fun of that, but you’d be surprised.

We don’t really have to explain much here, do we? There are some basics we all know and among the first of these is the fact that harassment is evil.

Some films and TV shows think it’s funny, though, and they’ve rightfully been called out and analysed to death. But here’s a funny little tidbit to the “it’s only art” crowd, real people trivialize male sexual harassment too.

Recently, Oscar winner Rami Malek came forward and told GQ he had been sexually groped by a woman.

This is not a first, seeing as singer Katy Perry has been accused, not once, but a whopping three times of sexual harassment. The first accuser is none other than Josh Kloss, her Teenage Dream model, who reported that Perry made the whole situation into something of a joke.

That’s the whole point of this. It’s always getting made into a joke when it comes to the “other kind” of harassment.

That doesn’t just affect the famous people, it affects everyone everywhere. This odd standard only means that the survivors risk more when they come forward.

Trivializing It Makes It Worse

Like all serious issues, making fun of harassment doesn’t “spur a conversation” or “bring attention to it“.

It actually makes it seem like this is something quirky and ‘cute‘. And the worst thing for any topic is quirky people who think that doing an awful thing to someone, who usually doesn’t experience it, is “powerful“.

This all reeks of double-standards, actually.

We’re not going to mention anything about female survivors here because we’re not advocating for the Oppression Olympics and “who has it worse” debate. However, we are going to mention that when men harass women, they (usually) get their due and this same punishment should be given to female harassers.

We’re not helping any cause whatsoever trying to pretend that these women have done nothing wrong. They did and they should get punishment. Harassment is harassment and that’s the end of the story.