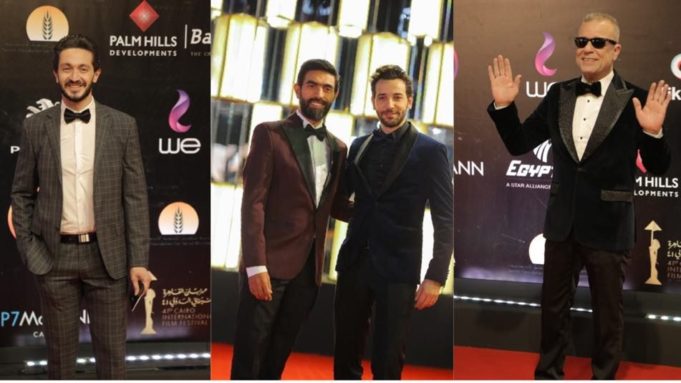 Not so long ago, our red carpets were a parade for traditional black tuxes. Gladly, that’s not the case anymore. Colorful tailoring and flashy accessories are now taking over. Here are the guys who dressed to impress at the opening!

Was there anyone cooler than Sherif Monir on the red carpet? We think not. The actor slash drummer rocked a black velvet suit, and paired it up with an old-school Ray-ban shade.

And this, people, is what a leading actor looks like. Eyad went super classic but kept things interesting with the little details!

Our favorite, Amr abed rocked the red carpet with a maroon tux. The fitting is perfect, the color matches his complexion and everything else fell right into place!

Fego gave us a silver fox vibe last night with the beard and mustache! There’s nothing special really about the tuxedo, except for a nice fit and an overall classic look.

Another successful look was Karim Kassem’s. With a royal blue velvet jacket and a bow of the same color, he was looking so sharp! Whoever said black doesn’t go with black, was clearly wrong.

Our favorite You-tuber and actor definately stole eyes yesterday. He was probably the only guy in a plaid suit. We applaud him for thinking outside the typical suit style!

Chicko never failed to nail his red carpet looks. the comedian stole eyes yesterday, not just for his fancy suit, but for his wining personality as well!

There’s nothing quite like a perfect slim black tux. Our favorite host seems to know that fashion advice quiet well!

The rising star that caught our radar surely knows he’s way around red carpets. He definitely looks the part!

We’re glad the boys had some fun, too!