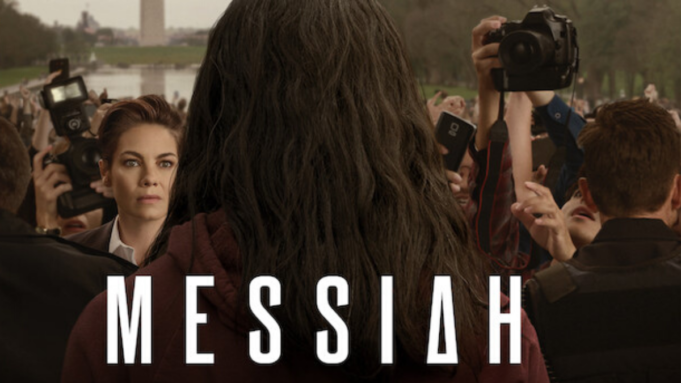 If you have never seen a TV show that makes you want to figure out time travel to take you back before you made this awful decision to watch it, you need to see Netflix’s Messiah. We know, this sounds like a mouthful, so we’re calling it Mess for short.

Think we’re exaggerating? Fine, go watch one episode and come back to the review. Done? Okay, let’s get to it!

Warning: if you’re Muslim or if you have an internet connection, chances are you have a gist of this story.

The events of this show start with the appearance of a mysterious man after a tragedy strikes ISIS-occupied Syria. He preaches to a lot of people and miraculously summons a storm that makes the occupiers a threat no more.

Because of the weight of the miracle, many, many, many supporters follow this mysterious man willingly into a desert without food or water.

Then, of course, the American authorities take notice and begin the hunt for the mysterious man, with the same violent vitriol it has for any brown-skinned, could-be-Muslim man.

If you’re following this show for religious purposes, you’re possibly going to be aggravated because of the people’s theories. Considering the plot is quite weak, there’s a good chance the writers will take them into consideration.

We’re going to try to be as unbiased as possible in our judgments, but it seems that, for all intents and purposes, that all characters existing in the Messiah Show world don’t have internet. Other than the many passing side-characters, we have about four main characters who are all mostly one-dimensional as well.

It’s honestly astounding how you can easily see through the ‘manipulations’ of the Antichrist, portrayed by Mehdi Dehbi ironically enough, and yes, you will know the mysterious man is the Antichrist because Netflix quite literally calls him that on Wikipedia and loses all “mystery”. — note*: this was before the Wikipedia page change.

Of our other three main characters, two work in extensive torture and pretty much follow the Dark But Misunderstood trope to a tee and we’re supposed to feel bad for them because the plot says so.

The third, we suppose, shows some promise in being a human character who was easily led, so we’ll give them that one.

What Could Make This Better

There’s no getting around this. The writers could have done better with this story, if they gave it more thought. It’s not an exact science to see how it could be ten times better from a better perspective.

So, what makes up a better perspective? Well, one told from the eyes of the people in Middle East/North Africa region would certainly work, considering we’ll get lumped into the middle of things eventually.

Another thing that would make the story better is, you know, not making the most important character an agent of the American authorities. Believe it or not, inclusive imperialism is not the way to go.

Just skip this show, it’s what the writers wish they had done.