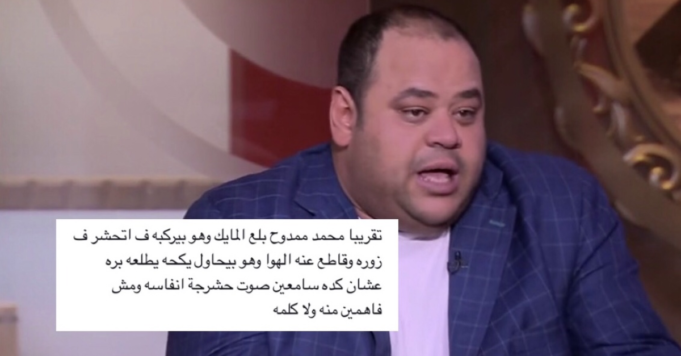 Egyptian actor Mohamed Mamdouh finally breaks his silence on the cyberbullying he received about his performances, last Ramadan.

And to be honest, the criticism, or dare we say, the bullying the actor received was not just about his performance in – specifically – “Qabeel“.

Actually, there were people who had nothing to talk about other than Mamdouh’s breathing issues and his ‘odd‘ voice. And well, that has been happening for quite some time now.

Which is, of course, what Amr Adib recently asked the actor about in his show “El-Hekaya“.

We’re not going to talk about how outstanding Mamdouh’s reaction to all of this has been. Since, he basically owned up to what everyone said and simply admitted that he’s actually being treated and is taking speech therapy sessions to help with his pronunciation.

However, we need to ask ourselves; is what happened to Mamdouh bullying or were people just rightfully criticizing his performance as an actor?

As part of the audience who watch movies and TV series on a regular basis and love to see deserving actors on screen, we kind of get the point of some.

Those who said they can’t even hear Mamdouh when he speaks because his words are not clear, kind of had a point. ONLY if they actually meant it, not just jumping on the “Mohamed Mamdouh has an odd voice” trend.

Why do we think they might have a point? Well, part of being an actor, and a good one for that matter is knowing how to deliver a good performance and send the message clearly to the audience.

How else would anyone send the message on screen – in most scenes – other than speaking the words in the script, in the best way possible? Or at least, one that would serve the role and story.

That being said, some people did take it too far. And it surpassed, at some point, the whole ‘criticizing the performance‘ thing. And we couldn’t find another description for it, other than cyberbullying.

An actor should always work on bettering himself, to make people believe and appreciate him on screen. And according to Mamdouh, that’s exactly what he’s been doing. Especially that he acknowledged his problem.

However, he said one thing that made us stop and think for a while: “I have breathing problems but this is out of my hands. Same for my voice, I can’t change it.“

And here’s where we thought that yes, he should work on himself and he already is doing that. But why would anyone in the world – not bully here – but even criticize someone for the way their voice sounds? Let alone, the way they take in and let out their breaths!

All we want to say is: We respect Mohamed Mamdouh, not just because we love to see him on screen; but not many people admit to their flaws in such a kind and forgiving way.

We also wish people would be more kind when they try to ‘criticize’ someone.

Because there’s a fine line between criticizing a performance or an act, and bullying someone for how God created them. Whether it’s looks, skin tone, voice or anything for that matter.