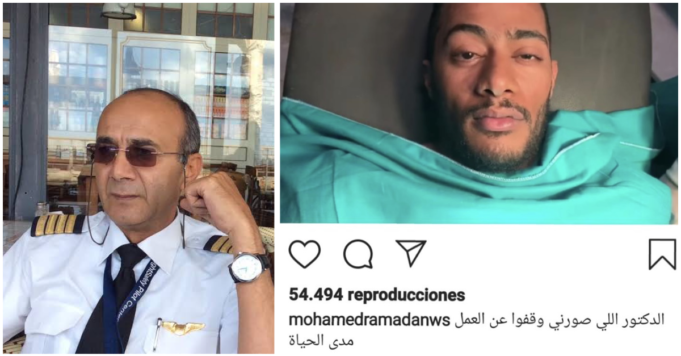 Last September, Mohamed Ramadan was the reason an Egyptian Pilot named Ashraf Abo El-Yousr got a lifetime suspension from his job. All because the actor/singer wanted to take a photo in the cockpit of the private airplane as a souvenir to show his son back home.

Or at least that’s how he convinced the pilot to let him film the now-viral video, according to Abo El-Yousr.

But of course, all hell broke loose as he posted it on Instagram captioned: “My first time flying an airplane“.

While his music played in the background, the one filming muttered the words: “I swear to God Mohamed Ramadan is the one flying the plane right now.“

Not long before the controversial video reached 1M views, the whole thing turned into a matter of public opinion. As social media called for the pilot to be suspended for the incredibly dangerous and irresponsible behavior.

Up until this point, nobody could’ve blamed those who saw the pilot as the bad guy in the story.

However after he posted a video explaining the situation, the tables so rightfully turned on Ramadan – who didn’t even take permission to post the reckless bragging video and who, obviously, wasn’t ‘flying‘ the plane or anything.

And while the co-pilot received a one-year suspension, Abo El-Yousr received a lifetime one, just three years before his due retirement. Not to mention that his flying license was, of course, withdrawn.

We honestly wish the story had ended here. But the worst was yet to come. As Ramadan posted a video complaining about how the pilot refused job offers through his connections and asked for 9.5M EGP as compensation.

Honestly now, how do you get a job offer for a pilot whose license has been withdrawn by the Ministry of Aviation? It all just doesn’t make sense.

Even worse, after the pilot posted another video firing back at Ramadan – saying that he’d only ask for compensation via legal channels as well as denying the job offers Ramadan ‘claimed‘ he got him, the actor posted a video of himself during what looks like a fake surgery with the caption:

“The doctor got a lifetime suspension for filming me.”

This whole situation is just incomprehensible.

Simply because being the reason someone’s noble reputation is ruined is not a matter to be taken lightly. Most importantly, making up lies about people and leading them to lose their jobs and source of income is not funny. Not to mention that joking about it in a video is inconsiderate, on so many levels.

It honestly seems that some people just have no idea about basic human decency or how not to be a snob just because they’re a celebrity with a big platform and a fan club who’ll believe and support anything they say; with no regards to other people’s feelings or ruined lives and tarnished history.

Abo El-Yousr vowed to file a lawsuit against Ramadan and rekindle his reputation as well as seek compensation in court. And we really wish all the best for him because this is all simply unfair to him and his poor family.